Mike’s note: If you attended Larry’s Trade-a-Thon last night, thank you for stopping by. And enjoy trading with Larry’s Foolproof 50.

If you didn’t show up for the result of Larry’s trade… Well, it was a complete blowout. You can get all the details in a replay right here.

Now, on to today’s issue…

Read on to see how he managed to trade on such a chaotic day, and what he sees ahead for this decade-long bull market…

One Lucky Break During the Black Monday Crash

The Dow closed down almost 23% – after recovering from a more than 25% loss on the day. The largest one-day drop in its history.

There was so much volume in the market, the computers got overwhelmed and shut down. The entire market stopped for hours at a time. Traders left the floor and wandered the streets, shoulder to shoulder, without a clue of what to do.

It was complete pandemonium.

For better or worse, I don’t think we’ll ever see a day like that gain. I’ll tell you why by the end of today’s essay.

But first, let’s talk about the key events that led to the crash…

Of course, hindsight is 20/20. But we all should’ve seen that crash coming…

During the entire month of July 1987, the market only had one down day. It just kept going higher and higher every single day. Euphoria was setting in. It was a classic overextended condition. But most folks didn’t recognize it at the time.

Then, seemingly out of nowhere, it became a little more volatile in August. Didn’t seem like much to worry about at the time. The market was still up about 25% on the year.

But then September came, and more volatility along with it…

And by October, leading up to the crash, volatility was really picking up…

The Friday before the crash was expiration day for options. Today options expire on Mondays, Wednesdays, or Fridays. But back then, expiration day was just once for the entire month. So it was typically a pretty volatile time of the month.

And this one didn’t help much. It was a particularly big expiration day. The market got crushed and finished near the lows.

Then, we showed up for work on Monday…

It was a total crash. Completely nuts.

Back then I was trading for Fossett Trading Company for a guy named Steve Fossett. Steve was an unbelievable investor, really successful.

On the trading floor, I was trading my own money along with his. I was short six put options and six call options. At the time, that was a big position for me.

And the market just kept going down…

When the market goes down, generally call options go down, too. But since it was so volatile, call option premiums actually rose. You’d think with a market going down that much, they’d be at zero. But with all the volatility, these calls went to $50. If I bought them back at that level, I would’ve been crushed. And I almost had to.

There were margin calls on that day, so investors had to close all positions.

I plainly told Fossett I didn’t want to buy the options back – because it was just ridiculous, considering the action that day. I got away with it.

The market went up 500 points the Tuesday after the crash. The calls I sold for $6 went from a massive loss of $50… to $1 per contract.

I’m lucky I got to hang on. I didn’t do great, overall… especially with that put trade. But if I had been forced to cover those calls at $50 the day before, it would’ve blown the account to 0.

The market inefficiencies were just complete mayhem. No one knew how to react…

Like I said, there was a period where all trading activity basically stopped. When the afternoon rolled around, there were more people outside the exchange than inside. People were freaking out and walking around mesmerized.

There was no market. The exchanges were hardly functioning, if at all. If you wanted to sell a stock, you couldn’t. The system totally crashed. The game was over… the market was closed.

So, we basically stopped working in the middle of the day. And there were more people on Broad and Wall St. than I’d ever seen.

Then on Tuesday, the market opened up and investors got robbed. Stocks opened significantly higher than where they closed, and came pretty much all the way back to Friday’s lows.

These days, I don’t think an event like Black Monday would be allowed to happen.

With the circuit breakers we have now, it’s basically impossible. The Federal Reserve just steps in and accommodates. The market closes automatically if things fall too far.

There would be panic, but now there are safeguards to that panic. If you stop the market from trading, people go home and clear their head. Drastic behavior just wouldn’t continue the way it used to.

But even though I don’t think we’ll ever see something quite like that again, I’m a bit cautious of the market right now…

Over the last few years, the market has enjoyed mostly low volatility. (I’d consider anything above 20 to be high volatility.)

We were just around 11 in late November. The market fell 2% in the first two days of December.

So, even though the pops in volatility last for a week, at most, the market just can’t seem to handle it.

Still, given the current market conditions, I’m not anticipating a December meltdown like last year. Mainly, because I believe the mantra that “the market never does the same thing twice.”

That doesn’t mean other people will see it that way… Again, we had an ugly start to the month. Everyone was panicking then, but we’re back up near all-time highs. I believe the market will close out the year near or at an all-time high.

But a year from now, it’ll be lower.

We’re at the peak of the market cycle. We might be about to enter the most volatile period of the last 10 years. And thanks to what I learned from Black Monday, we’ll be more prepared than ever.

P.S. Thanks to everyone who turned up to last night’s event. I’m especially happy with the result of the challenge… We traded our way to a HUGE donation for Boca Helping Hands!

If you didn’t catch last night’s event, and still want to get a rare peek at my trading process, you can watch a replay right here.

In Case You Missed It…

WOW! Did you catch that?

Actually, he made the bulk of it in just a few hours.

All of that money – every single penny – is going to a local charity, Boca Helping Hands.

To claim your charter membership to Larry’s new advisory, click here now. And remember: 1% of your purchase goes directly to Boca Helping Hands. Your subscription tonight will help feed 150 people. 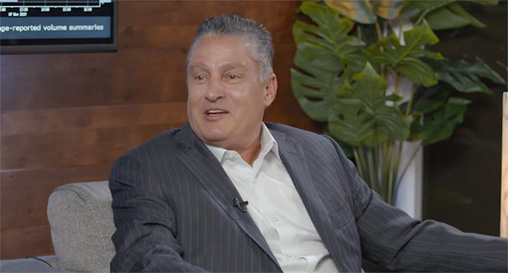