For several years now, it seems as though the financial world has been consumed by just one thing… cryptocurrency.

And, as we’ve seen many times this year, a single tweet from a famous billionaire can have a token go through the roof (or floor)… Sometimes in the space of just 24 hours!

Even the biggest crypto of them all, bitcoin, isn’t immune to eye-watering corrections…

While many investors believe they should have some crypto exposure, wading through thousands (one estimate puts it at over 13,500) of tradable coins is just simply impossible.

Not to mention the stress of dealing with huge potential losses and the need to safely store their holdings in a digital wallet. It’s enough for many to believe that crypto is too difficult.

However, over the coming days, I’m going to share with you one way I trade the crypto sector. In fact, it’s a strategy we’ve used very recently with my trading service, The Opportunistic Trader.

Today, we’ll kick off with a trade we did with bitcoin… without having to buy or store it directly. Then, we’ll analyze a series of trades we did on a part of the crypto space that some investors overlook – crypto mining.

The product we used to trade bitcoin is the ProShares Bitcoin Strategy ETF (BITO) – an ETF launched on October 19 with around $1.3 billion assets under management and turning over around $300 million a day.

BITO doesn’t buy or sell bitcoin directly… instead it seeks to replicate the bitcoin price by holding CME-listed bitcoin futures contracts. This means that it’s managed and controlled by a regulated exchange.

With BITO breaking down below its 10-day moving average (MA – red line), we entered a short position on November 18.

Take a look below… 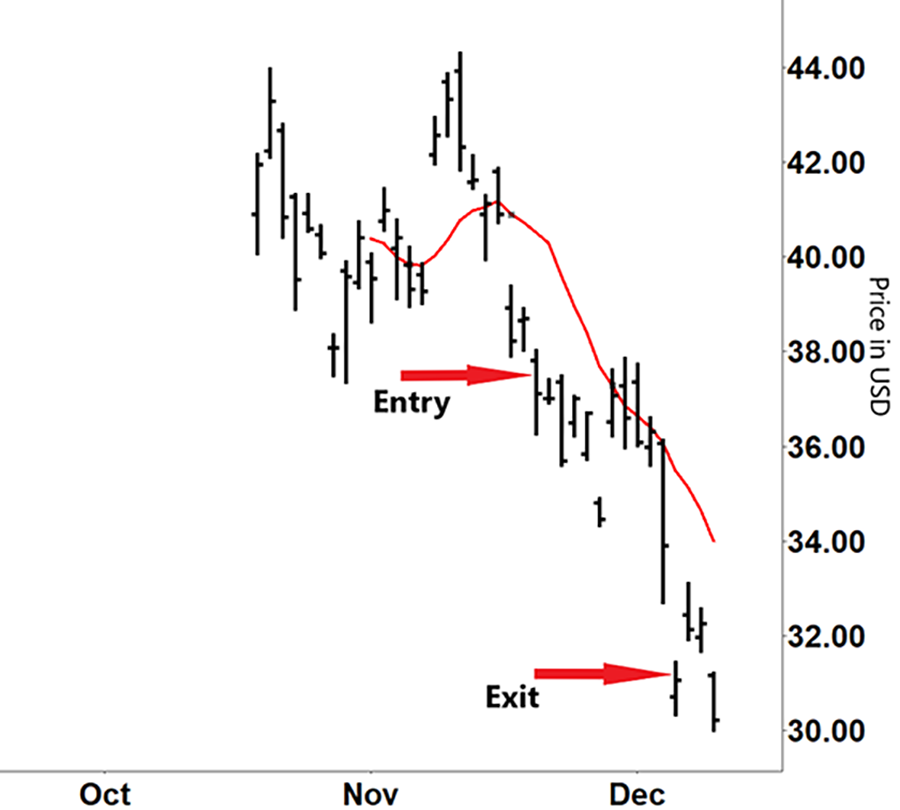 As a reminder, I use bar charts because they show where the price opened (hash on left side) and closed (hash on right side), as well as the high and low for the period.

Because of BITO’s short price history, let’s check out a chart of the bitcoin price over the past six months to give us some more context…

We bought a put option on BITO to gain short exposure. When a share price falls, a put option should increase in value.

And that’s exactly what we saw with our trade in The Opportunistic Trader. After entering our trade on November 18 by buying a put option, we sold it to close the position on December 6 for a 72.3% profit.

And that comes back to what we touched on earlier about dealing with the huge swings that bitcoin and other cryptos go through.

By buying an option, we know before we place a trade exactly what our maximum loss might be. And that means we have full control in managing our risk, especially when you compare it to holding the tokens outright.

So, if we think bitcoin is going to rise, we can buy a call option on BITO. If our analysis proves wrong and the BITO share price instead tanks, the most we can lose is the premium we paid to buy the option.

Similarly, had our analysis in our BITO trade proved wrong – and the BITO share price rose instead – the most we would’ve lost is the premium we paid.

You can see how using this bought-option strategy – having a known and quantifiable risk – could be a real game changer in how you trade bitcoin.

Tune in tomorrow where I’ll show you just how much this strategy saved us when we took out a put option on crypto miner, Marathon Digital Holdings (MARA)…

Do you trade bitcoin? If so, do you prefer trading the coins directly or through proxies like BITO?