When the Dow Jones index recorded its best month in almost 50 years last October, it was all over the news…

And it wasn’t just because of the size of that monthly gain – a whopping 14.1%. It’s because that run represented a fundamental change to the status quo – that is, the flow out of the big tech and into “old economy” stocks.

When we checked out SPDR Dow Jones Industrial Average ETF Trust (DIA) in early November (red arrow in the chart below), it had just stopped for a breather after its October run.

Then, after a brief dip, DIA went on to rally to fresh highs… all the while the Nasdaq was stuck bouncing along its October lows.

After such a strong run-up, though, DIA has recently softened and is about to retest a key short-term level.

So, today I want to discuss how things could play out from here…

Throughout this downtrend, DIA made a series of lower highs, as shown by ‘A,’ ‘B,’ and ‘C.’ That’s a common bear pattern. 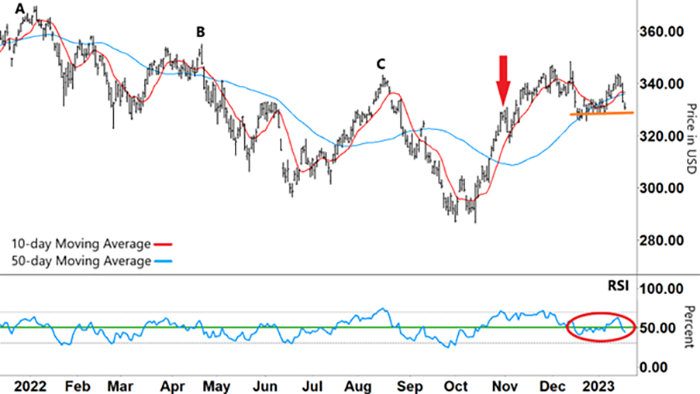 The RSI forming a ‘V’ at or near oversold territory (lower grey dashed line) triggered each counter-rally against the overall downtrend.

Now, DIA reversed at ‘C’ and headed lower when the RSI made an inverse ‘V’ from overbought territory (upper grey dashed line). However, you can see a different pattern after the RSI peaked in early November…

Although it also initially reversed, the RSI then turned higher and continued to track along the overbought line.

However, when the RSI and stock price are tracking in different directions like this (red lines), a change of direction is often in the cards.

As you can see, that’s exactly what happened… DIA turned lower before trying to rally again.

But that rally recently petered out, sending DIA back down near a short-term support level (orange line)…

As you can see, they are tracking each other closely…

DIA traded sideways along support (orange line) at the same time the RSI tracked closely along its support level (green line) too.

That brief rally earlier this month coincided with a spike in the RSI. And as the RSI inverted and tracked back to its support, so too has DIA rolled over and headed down.

So what happens next around here is key…

If the RSI can break back above resistance and gain traction in the upper half of its band, then that will help DIA hold short-term support.

And it could potentially lead to a rally.

However, if the RSI breaks lower and gets stuck in the lower half of its range, then DIA will find it very difficult to hold support.

A break below support, along with the RSI also breaking lower, could then provide a setup for a potential short trade.

Where do you think DIA is headed next?