Last year, the market was stuck in “opposite land”…

Things that seemed like good news – like a strong jobs number – saw the market take a tumble.

Other times, bad news (like a dip in consumption) saw the market react positively.

The reason behind that was simple… The market was obsessed with interest rates.

It read every economic release in terms of its impact on inflation. Tied to that was how the Fed would react with its interest rate lever.

But as I wrote to my Opportunistic Trader subscribers last week (paid-up members can access it here), it’s been a different story this year…

Back to the Basics

After eight months of the market reacting badly to job numbers beating estimates, a ninth month of the same was actually interpreted as good news.

That’s a sign that the market has moved on from its obsession with interest rates (for now at least).

For the first time in a long time, the market and the Fed members are aligned with where they think rates will be mid-year (around 5% in June).

After that, though, all bets are off…

The market is already factoring in 50-basis points (0.5%) of rate cuts in the second half of the year. Meanwhile, the Fed remains adamant that they won’t be cutting rates before the year is out.

Why the disconnect? Ultimately, the markets believe the economy will slow and go into a recession later this year (if we’re not already in one).

And they think the Fed will be forced to play another game of catch-up – this time, by cutting rates…

That question – the size of any potential recession and the Fed’s reaction – will be fought out later this year.

In the meantime, though, with the current truce on interest rates, the markets can go back to focusing on the basics…

Like jobs, unemployment, and consumption data (such as durable goods and retail sales) – the latest of which recently caught my eye…

When High Inflation and Interest Rates Start to Bite

The chart of U.S. retail sales below shows the full 12 months of last year… 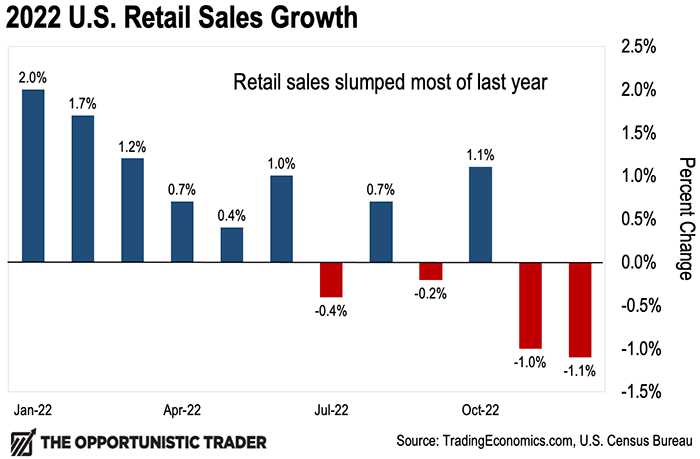 The 1.1% blip in October represents holiday shopping that was brought forward into October. Take that out, and the chart shows a clear trend down.

And the following 1.1% fall in December came in worse than the -0.8% forecasted.

Retail sales (a key component of personal consumption and therefore the economy) is faring far worse than expected.

The kicker comes once you include inflation…

Keep an Eye on Earnings

That 1.1% drop in December occurred with annual inflation running at 6.5%. Back in January, when retail sales increased by 2%, inflation was only 1% higher at 7.5%.

So in just 12 months, embedded high inflation (accompanied by higher interest rates) has steadily increased the pressure on consumers.

And eventually, that’ll flow into corporate earnings. That’s why this reporting season will be so important.

Late last year, the broader market enjoyed a nice rally from October into December. Then, after some tax-related selling in late December, we enjoyed a nice little run at the start of this year.

But since the market has now flipped back from “opposite land” and is once again watching the basics… this earnings season will show us how the economy is really doing.

And unlike last year, the market will react in kind.

Hi Larry, I’m enjoying your S&P Trader service. I’ve been an active trader for 15+ years. Trading and investing are my passions, and I love technical analysis. I’m constantly striving to improve and tweak my technical analysis and trading skills.

The reason I joined your S&P Trader service is when I saw your advertisement for it a couple of months ago. You said something that I had realized about one year ago. You made a statement about specializing in one ticker when trading. I believe that methodology is so simplistic and yet so powerful.

Up until the time I started with your service, I was mainly trading SPX using vertical debit spreads. This is when I started to consistently make money from month to month. I knew about credit spreads, but I didn’t really understand them until I joined your service. I now have a newfound respect for credit spreads.

Thanks for sending in your experiences! It’s great to hear from our readers. To share your comments, you can always email [email protected].