The global shortage of microchips and its impact on production lines is affecting everything from shipping smartphones to refrigerators during this holiday season.

However, the auto sector is currently facing the biggest disruption.

Both General Motors (GM) and Ford blamed the shortage for declining profits when they released Q3 results just a couple of weeks ago (compared to Q3 last year).

However, it’s not only American auto makers that are feeling the impact…

One-time GM subsidiary Opel announced last Friday that it would shutter one of its German plants for the remainder of the year, putting 2,000 jobs on hold.

With only around 10-12% of microchips made in the U.S. – and the $52 billion package to improve the country’s microchip industry (and other technology) stuck in Congress – it’s hard to see how the shortage won’t run well into next year.

So, to keep track of how the industry is doing, I use the VanEck Semiconductor ETF (SMH).

When we looked at SMH on October 18 (red arrow on the chart below), it had just bounced off support, after testing it multiple times throughout October. 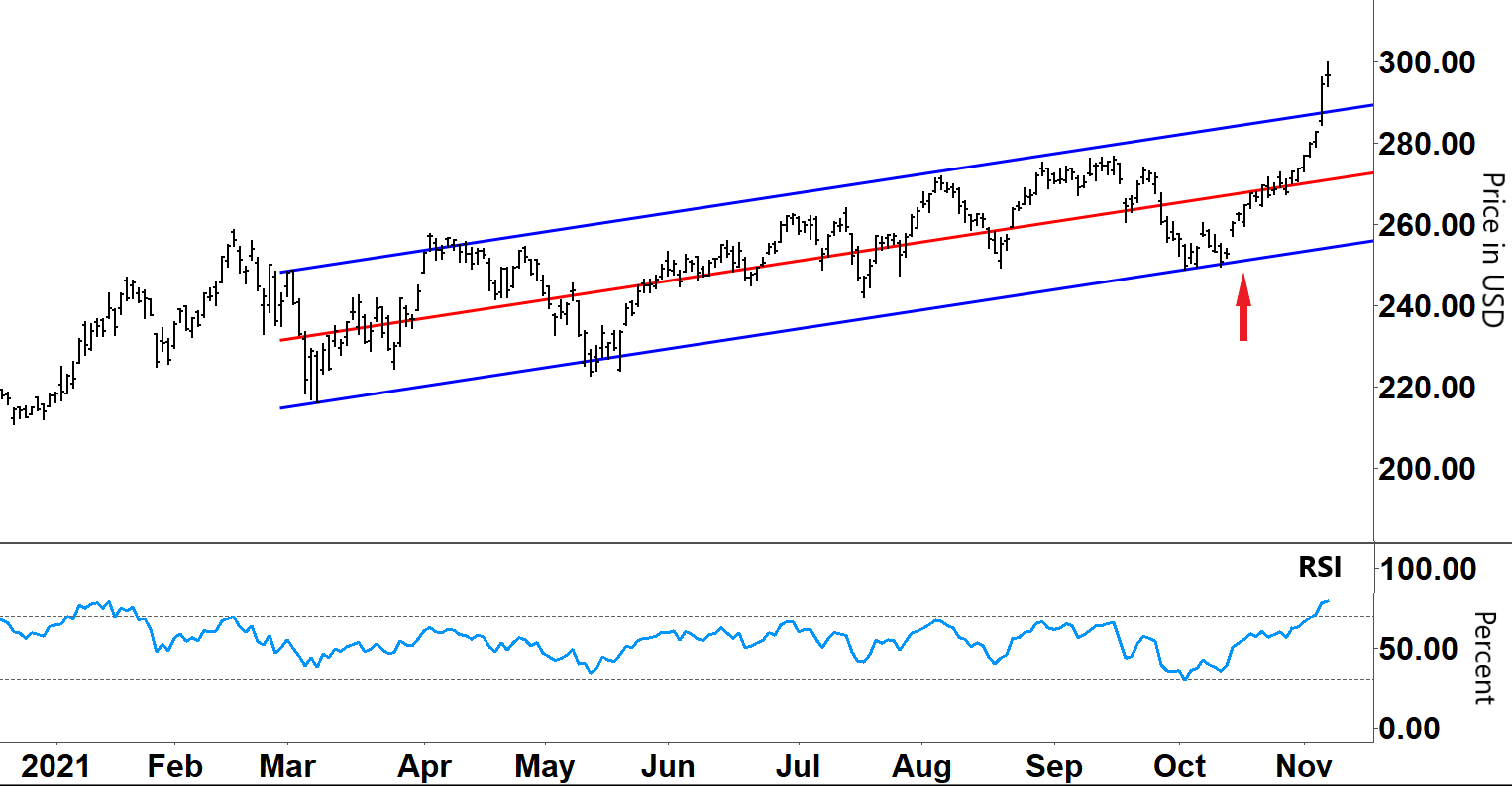 This type of chart pattern can generate plenty of opportunities for mean reversion trades.

As you can see, SMH has been steadily climbing throughout the year. The red line represents the long-term trend, and the two blue lines indicate the trading channel.

(Remember: The upper blue line acts as resistance, with the lower blue line acting as support. 95% of SMH’s price history is contained within these two blue lines).

Back then, we were looking for SMH to revert to the mean (red line).

As you can see, not only did SMH revert to the mean, it continued to keep rallying. Strong momentum from the RSI saw it trade right up and through the resistance line of the channel.

Right now, the RSI is indicating that SMH is overbought.

So, how will it play out from here?

The answer lies within the RSI…

We saw yesterday that when a stock price rallies strongly, it can sometimes skew the RSI higher too. And, it can even take a day or so to iron itself out.

Well, that’s what I’ll be watching for with the RSI over the next couple of days.

With SMH bursting through resistance, I first want to check whether the RSI is giving a false signal (that’s when the RSI gives an overbought signal before buying momentum declines).

The other thing I’ll be watching is the price action.

While it’s still early, that’s what I’ll be looking for with SMH. The first test is if it can hold above the upper blue line.

If SMH is able to hold support at this level, then that could form the basis for another move higher. And that could mean SMH is transitioning from a slightly rising range-bound pattern into a new uptrend…

That’s something that could provide us with a chance to go long.

For now, though, we’ll have to wait and see. However, should this breakout hold, it could be very promising.