When stocks were getting smashed at the start of 2022, the Financial Select Sector SPDR Fund (XLF) initially held up relatively well.

XLF’s high in March was only a couple of dollars below its January 2022 peak… and it was higher than where it finished off the previous year.

However, as 2022 unfolded, the huge weight of heavy selling pulled down XLF too…

By mid-year, XLF had dropped almost 30% below its January high.

A counter-rally from July through August showed early promise. However, that ran out of momentum and reversed… which then saw XLF take out its yearly low.

Since then, XLF has gradually been grinding higher. It could soon break above its recent December 2022 high.

So, today I want to check what’s coming next as we look out for potential trades…

Breaking Out of a Sideways Range

The 50-day moving average (MA – blue line) in the chart below shows how XLF’s downtrend accelerated from April through June.

Throughout this period, XLF also made a series of lower highs… 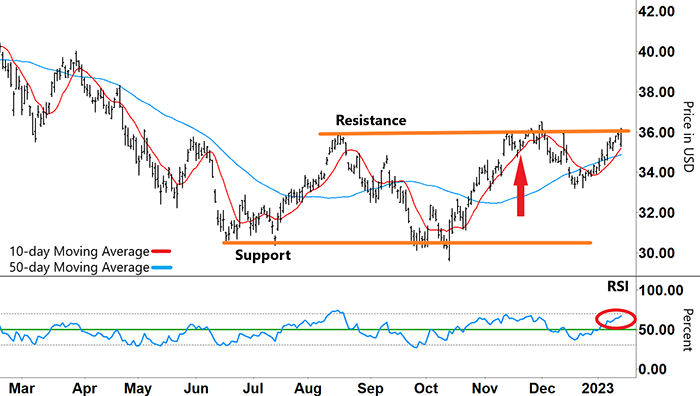 Another bearish signal appeared in the Relative Strength Index (RSI)… It remained mostly in the lower half of its range throughout XLF’s down move.

However, buying momentum gradually returned from June through July. XLF was able to find a base. The 50-day MA shows how XLF then transitioned into a sideways pattern…

When we looked at XLF on November 22 (red arrow), we saw how XLF has tested support numerous times and held. We can see that from June through July and then later from September to October.

However, I was watching the upper orange line (resistance) closely…

At the time, XLF had just retested resistance and turned lower. This was the same level it retraced lower from at its August peak.

From there, XLF did subsequently turn higher and break through resistance. But it was unable to go on with the move…

The RSI rolled over from near overbought territory (upper grey dashed line) and then tracked down through support (green line). That dragged XLF’s price back below $34.

Unlike the previous pattern (July through October), though, this time XLF’s selling petered out…

The RSI has broken back into the upper half of its range, and it is now approaching overbought territory (red circle) again.

And now XLF is pushing right up against resistance. So what am looking for around here?

For XLF’s current up move to continue, we’ll want to see it take out its December high…

We’ll also want the RSI to keep tracking in the upper half of its range without it forming any sharp reversal (an inverse ‘V’).

The longer the RSI can remain in its upper band without reversing out of overbought territory, then the longer any potential rally will be.

However, action around XLF’s resistance and the RSI will be key…

If the RSI reverses from overbought territory and XLF reverses off resistance, then the current uptrend has come to an end.

If the RSI then tracks back toward support (green line), then it could instead provide an opportunity for a potential short trade.

In today’s mailbag, a One Ticker Trader member shares their successful experience with Larry’s trade recommendations…

I have been learning to day trade for the last couple of years. I have tried many signal services and even live trading rooms and none of them have delivered the kind of results that you have with your One Ticker Trader service! Having been burned so many times, I am now pessimistic and overly cautious (afraid) to the point of trading only a single contract at a time.

On my first trade, I more than covered the introductory price of your service. The second trade almost doubled that, and the TSLA trade you simply knocked out of the park (I exited prior to FOMC for +1.50, with which I was happy until I saw your results today at +4.50).

I really enjoyed your article on “earning risk,” as I am currently going through that phase to rebuild my confidence. I look forward to trading two contracts on your next recommendation. I’ll probably still exit early on one of them, but I will try to join you for the full ride on the other.

It’s good to know there is at least one honest guru out there whose reputation is well-earned! Thank you!

Thanks for writing in, Jason. We’re glad to hear you’re enjoying our trades and content. It really means a lot to hear we’re making a difference, so thanks for sharing.

And if anyone would like to learn how to join us, you can find out more right here.