It was a massive boon for the oil giants…

While tech stocks and the rest of the market were tanking in 2022… oil stocks like Exxon Mobil (XOM) and Chevron (CVX) were going through the roof.

By the end of last year, Exxon and Chevron had rallied 80% and 53%, respectively. However, these weren’t the only oil behemoths that enjoyed huge gains…

On December 14, we saw how the SPDR S&P Oil & Gas Exploration & Production ETF (XOP) rallied a whopping 80% from January to early June.

After a sharp reversal, it then spent the rest of 2022 grinding higher with higher lows. And recently, XOP rallied off a key level. So today we’ll see what’s coming next…

On the chart below, you can see XOP’s massive rally up into June.

However, that rally reversed sharply when the Relative Strength Index (RSI) formed an inverse ‘V’ from overbought territory (upper grey dashed line) and then tracked steeply down… 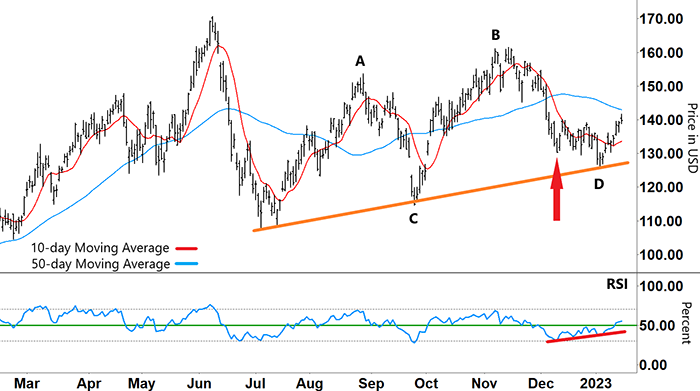 That steep fall bottomed out when the RSI formed a base around oversold territory (lower grey dashed line). From there, the first of two repeating patterns occurred…

That fall petered out and reversed when the RSI formed a ‘V’ in oversold territory (making a higher low) at ‘C.’

That pattern then repeated with XOP’s rally up to ‘B’ (a higher high). XOP then reversed from that high as the RSI inverted and tracked down from near overbought territory.

When we last looked at XOP on December 14 (red arrow), the RSI warned us that XOP again looked oversold. Yet, despite a brief bounce, XOP tracked sideways before trading slightly lower.

And just recently, the RSI bullishly broke back into the upper half of its range.

As you can see, XOP’s strong rally at the start of 2022 (followed by its rallies up to ‘A’ and ‘B’) coincided with the RSI tracking in the upper half of its range.

For XOP’s current rally to continue, we’ll need to see the RSI regain firm footing and remain in this upper band.

But if the RSI makes any move back down through support (green line), then that would indicate the current rally is likely over. I’ll also be watching our two moving averages (MAs)…

Right now, XOP is trading up toward the 50-day MA (blue line). If the 10-day MA (red line) breaks above the 50-day MA (and accelerates higher), then that will add further confirmation of the current uptrend.

A repeat of the previous two patterns (‘A’ and ‘B’) could then potentially set XOP to make a new higher high above ‘B.’

In today’s mailbag, we hear from Brent B. and John S. about their positive experiences with Larry’s One Ticker Trader service…

My first two trades after joining in November were OK… 10% on DIA and 6% on SPY. For TSLA, I was able to buy the call quickly at a good market value. I almost sold around 70% a couple of hours before the sell half notification. I had one contract, so I held. I sold at 90% 30 minutes before the final sell to close notification. Now I should be able to trade two contracts for our next trade! Thanks!

Good day, Larry. I have to tell you, I’m very pleased with your One Ticker Trader. I’ve spent my trading life trying to do single trades, but somehow, I always ended up with more than one position. You are great, as you will not encourage me to do that, and you’re so different from all the other systems. I am absolutely going to follow what you suggest, and not get smart by trying to put my ideas in and screw it up. I’ll just sit back, follow your lead, and make money.

Thanks for sending in your experiences! It’s great to hear from our readers. To share your comments, you can always email [email protected].

And to join our One Ticker Trader trades, simply go right here to learn more.