Last week, we looked at a recent trade we did with One Ticker Trader.

By using a mean reversion strategy, we made a 23.5% return in less than 24 hours by trading options on the Dow Jones Index. It was our ninth winner in a row.

Today, I’m going to explain this strategy further by running through another recent trade we did with that service…

This time, we traded options on the Nasdaq Index – using the Invesco QQQ Trust Series 1 (QQQ). The trade lasted two days and generated a 23.7% return.

Remember, when it comes to mean reversion, the strategy remains the same no matter what ticker or time frame…

I look for a stock or index that has overshot. And then we aim to profit when it snaps back the other way – like a rubber band stretched too far.

Now let’s see how this QQQ trade played out…

The Market Got Too Far Ahead of Itself

Take a look at QQQ’s chart below… 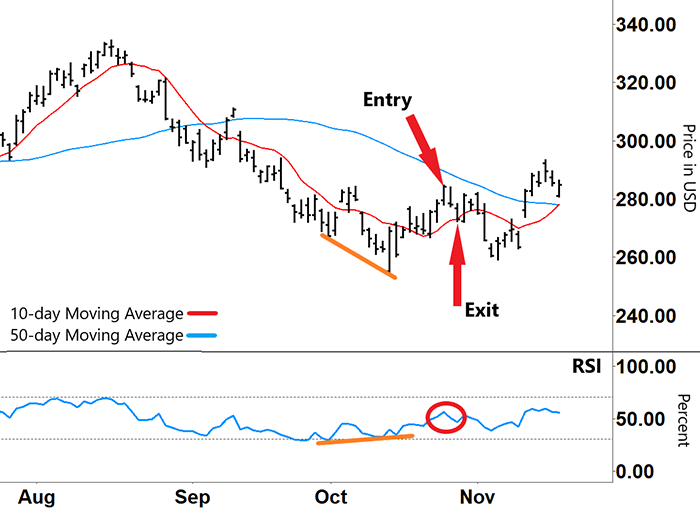 QQQ’s fall petered out when the RSI and stock price started to move in different directions (orange lines).

While the RSI began to trend higher (making higher lows), QQQ’s stock price was making lower lows. This change in momentum triggered QQQ’s rally from its low ($255) on October 13.

However, QQQ’s subsequent 11.5% rise in just two weeks eerily reminded me of the summer rally.

Back then, the market simply got way too far ahead of itself. That led to massive disappointment when the rally wasn’t sustained.

And with tech earnings about to commence, I feared a repeat. I suspected the market had once again shot too far.

The RSI on the QQQ chart was also forming an inverse ‘V’ (red circle), warning of another potential change in direction.

While we typically look to the RSI’s extremes – when it is overbought or oversold – we can still trade countermoves within the overall RSI trend.

So, with the RSI inverting – and QQQ vulnerable to any earnings disappointments – we took out a short position by buying a put option on October 25. (A put option increases in value when a stock price falls.)

Two days later on October 27, our trade was nicely in profit territory. So we closed out our position by selling our put options for a 23.7% gain.

Take Your Profits When You See Them

Our QQQ trade once again highlights how important it is to be nimble. You should always take your profits when you see them.

As I like to say, put a “P” (profit) on the page. It sure beats swinging for the fences. But there were a couple of other reasons why we took our profits at that time.

With tech heavyweights Amazon (AMZN) and Apple (AAPL) about to report earnings, a surprise to the upside could have sent our put option underwater.

And the volatility index (VIX) looked particularly weak. That can sometimes indicate the potential for a surprise rally.

So we took our profits and banked them. Of course, we generated this return by using options…

However, whether you trade options or prefer to stick with shares, this trade shows how even a small change in momentum – in this case, a reversal – can provide the setup for a profitable trade.

That’s one secret to our success so far in One Ticker Trader… and I’d like to invite everyone to learn more if you aren’t already a member. You can find out the details about our strategy by going here.

In today’s mailbag, One Ticker Trader member Joseph thanks Larry…

I’m excited to have signed up for Larry’s One Ticker Trader program. Thank you.