After ignoring inflation for a whole year, the Fed undertook a complete reversal within the past couple of months.

After last month’s bumper 0.75% rate rise, a similar rate hike is in the cards for July. Even if rapid rate hikes imply potential job losses and an increased probability of a recession.

The entire stock market has been torched by rising interest rates. But the real estate sector has especially felt the pain.

Since the start of 2022, the iShares U.S. Real Estate ETF (IYR) has been in a long-term downtrend.

When we last checked IYR on June 14 (red arrow on the chart), it was falling again after a false rally.

Today, I’m going to follow up on that move and talk about what we can expect from here. 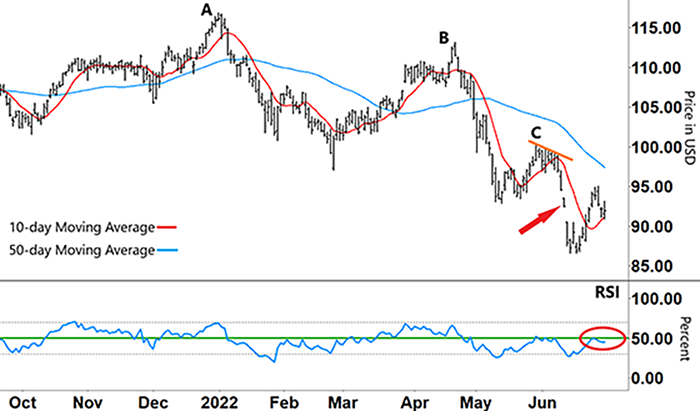 That move was caused by the Relative Strength Index (RSI) trying to break through resistance (green line). But the RSI failed and IYR ran out of momentum. The orange line shows IYR made a series of lower highs.

Then, when the RSI reversed sharply lower, IYR followed it down. The red arrow shows IYR was almost in freefall as it gapped down.

However, that sharp selloff led the RSI to close in on oversold territory (lower grey dashed line).

Next, I’m looking to see if IYR could repeat its previous patterns.

In the past, each time the RSI formed a ‘V’ out of oversold territory, IYR subsequently bounced.

As you can see, that’s exactly what happened.

When the RSI rallied higher out of oversold territory, IYR formed a short-term base from which it rallied.

Now, the RSI is pressing up against resistance again as shown by the red circle. And IYR’s recent rally has stalled.

Well, what happens next around RSI’s resistance level is key.

If the RSI breaks above the green line and remains in the upper half of its range, then we can expect IYR’s rally to regain momentum.

The next test for any rally would then be for the 10-day MA (red line) to break back above the 50-day MA.

However, if the RSI fails to break through resistance, IYR will likely lock in another lower high which will become ‘D.’

And that would mean the long-term downtrend will remain intact.

From there, a down move in the RSI would cause IYR to also fall… creating an opportunity for a short trade.

But in the following weeks, we’ll have to wait and see if IYR can take out its June low.

Do you think the real estate sector will continue tanking as interest rates increase?