Streaming giant Netflix (NFLX) is a perfect example of how the market treats a stock with a disappointing earnings report.

Coming into 2022, Netflix was already under pressure. After peaking at over $700 a share in November, it fell 27% heading into Q4 results on January 20.

However, despite delivering reasonably good financial results, the market took a blow torch to Netflix when it forecast slower subscriber growth in the upcoming quarter. That resulted in Netflix shares dropping another 20%.

When you look at a chart like Netflix, the obvious trade would have been going short. And unless you shorted Netflix before the results, then you missed out on a very profitable trade.

However, in my trading service, The Opportunistic Trader, we picked up a 107% gain by getting in after the big fall.

I want to reinforce how vital (and profitable) it is to be nimble in the current market… and to look for opportunities that many other traders miss.

In the chart below, you can see the slide from November onwards. The 10-day moving average (MA – red line) crossing down over the long-term 50-day MA (blue line) confirmed the downtrend. 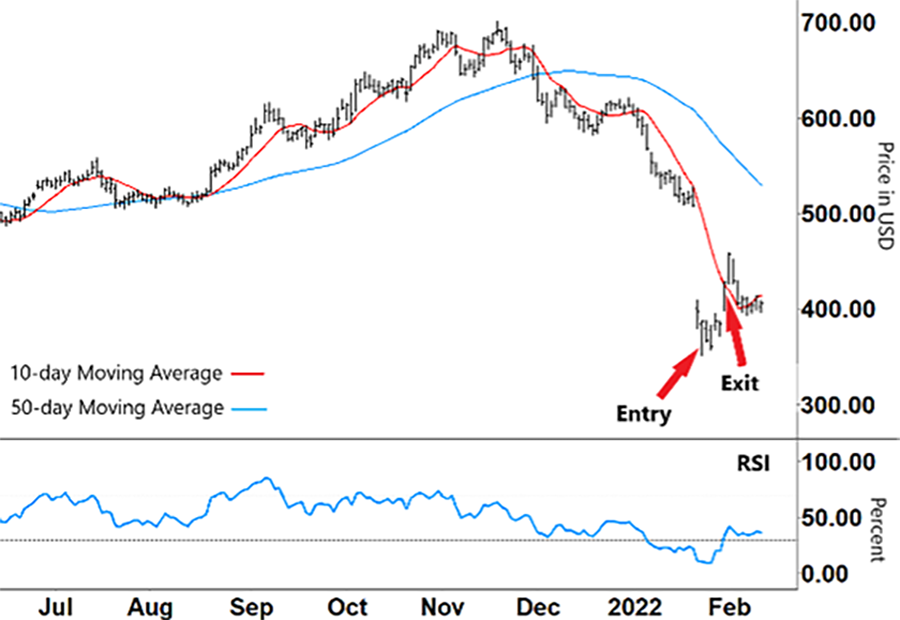 When Netflix released its results on January 20, you could see just how far it gapped down.

This is when most traders would be kicking themselves for missing out on a good trade. They might also look at a bunch of other charts in hopes of finding a similar trade setup.

However, with the RSI deep in oversold territory (below the lower grey horizontal line), we set ourselves up for any relief bounce by buying a call option (entry arrow).

(Remember: a call option increases in value when a share price increases. When you buy a call option, the most you risk is the premium you pay.)

When things get way out of hand – like when the RSI goes to its extremes (as it did with this trade) – you can expect the stock to bounce back the other way.

It might only be a brief counter-rally, maybe lasting just a handful of days. But it can also be a sharp move that provides a nimble trader with a quick and profitable trade.

Bargain hunters were jumping into the stock and driving it higher. Then, we closed out our position just a week later (exit arrow) for a blended gain of 107%.

Of course, we’re not always going to get it right… no one does. And since we generated this profit level using options, this increased our returns compared to buying shares.

Even if we had bought shares instead, that would’ve picked up around a 10% gain – not bad for a week’s action.

After bouncing, you can see that Netflix then drifted lower. If we held on for a bigger profit, then we could’ve given up a big chunk of our profits.

But with that money in the bank, we can always jump back in if we see another good trade setup.

When we make trades like this, it’s important to remember that we’re not taking a long-term view of the stock. We’re not placing our hopes (in this case) on Netflix returning to its pre-earnings price.

Instead, we’re being opportunistic. We saw a potential bounce, and we took it.

I always enjoy receiving feedback from my avid readers. Here are some of the latest responses…

I find this eletter very insightful and a great help in assisting me to make investment decisions. As far as gold is concerned, I’m pretty heavily invested in commodities and precious metals. I’m sitting tight to see what develops on the geopolitical front.

I’m a member of The S&P Trader and The Opportunistic Trader. Based on the way things have gone with SPX, I’ve nicknamed you “Coronary Larry,” because that’s what you’re going to give me! I love it. Keep it coming.