With inflation running rampant and interest rates set to rise, the resilience of U.S. consumers (and the economy) will soon be severely tested.

Especially when it comes to discretionary spending…

Food, rent, and gas prices continue to increase daily. As a result, consumers will have less money to spend on non-essential items. 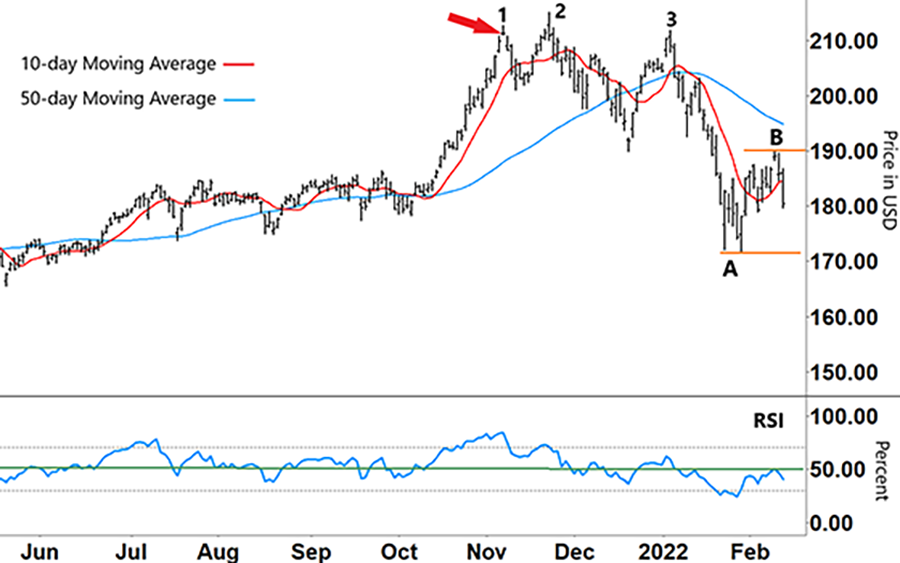 Back then, XLY was going through the roof…

Its second largest holding, Tesla (behind Amazon), had just signed a massive deal with Hertz. That saw its share price rally strongly.

After peaking in early November (1), XLY had a brief pullback before hitting its all-time high later that month (2).

However, since then, XLY has been trending down.

After trying (but failing) to break out to new highs, XLY made a lower high in early January (3) before getting caught up in a heavy selloff in January.

The differences between the two moving averages (MA) highlight the sharp and rapid drops in XLY.

For example, you can see how quickly the 10-day MA (red line) accelerated away from (and below) the 50-day MA (blue line) after crossing over at the start of 2022.

However, with the Relative Strength Index (RSI) showing XLY as oversold (below the lower grey horizontal line in the lower half of the chart), XLY bounced off short-term support at the lower orange line (A).

Then after a brief rally, last week XLY topped out at ‘B’ (the short-term resistance represented by the upper orange line). That coincided with the RSI hitting and rebounding lower off its 50% resistance level.

For XLY to form any kind of meaningful uptrend, first it must break above that short-term resistance at ‘B.’ We’d then need to see the 10-day MA cross back above the 50-day MA to confirm that trend.

However, neither is likely until the RSI can break out of its lower range (below the green line).

If the RSI continues to drift lower, then so will XLY’s share price. Meaning that over the coming week, we’re more likely to see XLY re-test short-term support at ‘A.’

Holding this level is vital because a break below ‘A’ could be the start of another leg down.

Given their huge weighting in the index, I’m going to keep an eye on both Tesla and Amazon too.

Amazon bounced strongly after its earnings results, but it’s still a long way (over 15%) below its high from November last year. But like many other stocks (and the market more broadly), Amazon’s bounce has now run out of steam.

It rolled over and is looking vulnerable…

And so is Tesla. It’s already down over 30% from its peak, and it looks like it will soon test an important level. A break below that could bring in a wave of new selling, adding to downwards pressure on XLY.

XLY will remain vulnerable unless sentiment in both stocks turns around.

What are your expectations for XLY?