Yesterday’s essay on our QQQ trade highlighted the importance of being nimble.

That short trade generated nearly a 40% profit in just two days for subscribers of my trading service, The Opportunistic Trader.

We did, however, leave some profits on the table. After exiting the trade, QQQ continued to fall.

Of course, that only becomes obvious in hindsight. You can only trade what’s in front of you at the time. QQQ could’ve easily (and quickly) bounced, eroding our profits altogether.

So to reinforce that exact point, I want to share another recent winner from The Opportunistic Trader.

This time, the trade was on energy giant Valero Energy Corporation (VLO). And like QQQ, our goal was to capture a potential fall.

To understand the rationale behind the trade, we need to first consider the chart pattern that preceded the current move. That previous move peaked where I’ve placed an ‘A’ on the chart below… 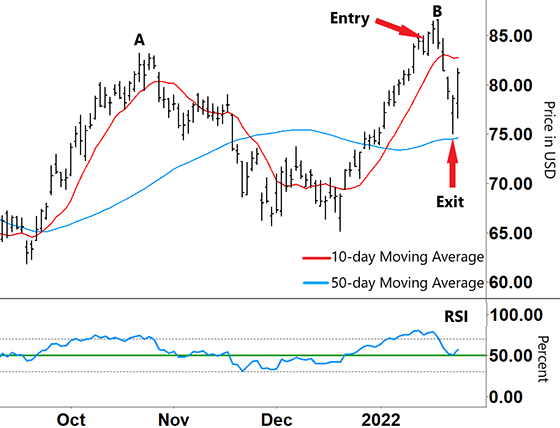 As you can see in the first move (that peaked at A), the rally commenced when the 10-day moving average (MA – red line) rose above the 50-day MA (blue line).

But with the Relative Strength Index (RSI) showing VLO as overbought (above the upper grey dotted line) in mid-October, VLO simply ran out of steam.

As the RSI rolled over and started to fall (along with the 10-day MA), so did VLO’s share price. After that fall, shares in VLO bottomed out throughout the first half of December.

Then, when the 10-day MA again broke above the 50-day MA in late December, I was looking for a similar pattern like the previous one to emerge…

With the RSI forming an inverse ‘V’ and deep into overbought territory (even more so than the October peak), we bought a put option on January 13. (Remember: a put option increases in value as the share price falls.)

You can see for the first few days that the market moved against us, as shares in VLO continued to climb right up to the peak at ‘B’. However, as buying momentum fell (along with the RSI), shares in VLO also rolled over and started to fall.

With the RSI closing right on support (50% level – green line) and oil’s price continuing to be highly volatile – we closed out our position on Monday for a 120% gain in just 11 days.

Like our QQQ trade from yesterday, I need to reiterate that using options increased our returns compared to shorting shares instead. And with options, you only have a finite amount of time before they expire.

In this trade, we saw a 120% gain and banked it. And unlike the QQQ trade, where shares continued to fall after our exit, shares in VLO did the opposite.

The day after we closed our position, VLO had a strong bounce. In this case, if we held on for even just one more day and got greedy, we would’ve given back a large chunk of those profits.

Giving up profits – or worse, watching a profitable trade turn into a loss – can be one of the most frustrating things in trading. The more volatile markets are, the higher this risk becomes.

That’s why you should always bank your profits when you see them. Then, reuse that capital for your next trade.

Has there been a time where you got too greedy on a trade and watched your profits disappear?