Last week in my trading service, The Opportunistic Trader, we extended our win streak to 13 trades in a row.

And it all started with risk management…

That’s because with increased market volatility, a profitable trade can turn into a loser in the blink of an eye.

So, we need to bank our profits as soon as we see them.

Today, I’m going to discuss one of the trades I mentioned in that piece – Apple (AAPL) – to show exactly what I mean.

By taking our profits, we generated an 80% return with my options trading service, The Opportunistic Trader, in just three days.

And that includes a weekend!

After bouncing in March, Apple resumed its downtrend through April and into May. 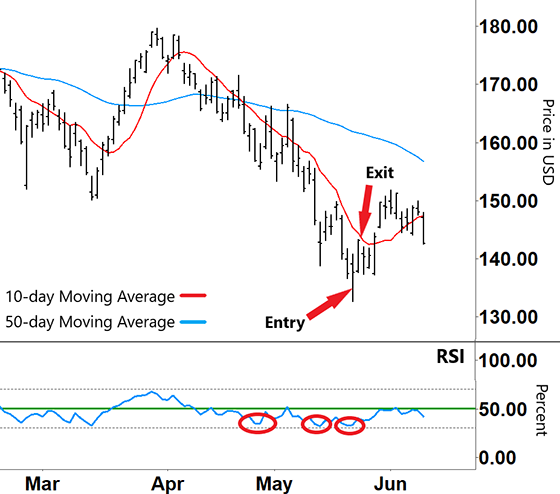 And the Relative Strength Index (RSI) reversed from near overbought territory (upper grey dashed line) at its March 30 peak.

Then, it broke down through support (green line) and into the lower half of its trading range.

Although this was clearly a downtrend, there were some countertrends against the major move down.

Sometimes even for just a few days…

These kinds of countermoves are typical in up or down trends… and they can provide a setup for potential countertrend trades.

After the RSI formed a ‘V’ to show Apple was oversold, we entered a long position by buying a call option on May 20.

Note that a call option typically increases in value when a share price rallies.

Then – when Apple opened higher on Monday and rallied strongly throughout the day – we closed out our position by selling our call option later that day for an 80% gain.

Remember, we’re not trying to capture huge counter-swings with these trades…

We’re not trying to guess where the stock might trade in 30, 60, or even 90 days either. We leave that to the pundits.

Instead, we aim for short-term retracements when a stock runs too far in either direction.

In this Apple trade, that meant a short-term rally against the prevailing downtrend.

After we closed out the trade, Apple traded sideways for a couple of days before rallying higher.

However, we couldn’t have predicted this was going to happen. The previous patterns showed us this bounce could’ve fizzled out just as quickly.

But with a very tidy gain in such a short period, I was more than happy to bank our profits.

With that money in our account, we can jump straight back into the next strong setup.

I want to be clear that we made this return using options. Meaning, we generated a higher return than if we had bought the stock instead.

And although this Apple trade was one out of 13 winners in a row, we’re not always going to get it right. No one ever does…

But by looking for countertrends within bigger trends (a reversion to the mean), we can still find plenty of profitable trading opportunities amongst all this volatility.

Were you part of the 80% gain we made with our options trading service,The Opportunistic Trader?