Tech stocks’ huge unravelling has been a major theme this year…

The Nasdaq’s yearly low in October represented a massive 37% fall.

But while the trillions obliterated in tech have stolen headlines, other sectors have been dramatically hit too…

When we last checked the iShares U.S. Real Estate ETF (IYR) in October (red arrow on the chart below), it was trading right around its lows…

But it was in the very early stages of an emerging rally.

On the chart below, you can see a clear bear pattern…

IYR has made a series of lower highs (A, B, and C). And the 50-day moving average (MA – blue line) has also been trending down. 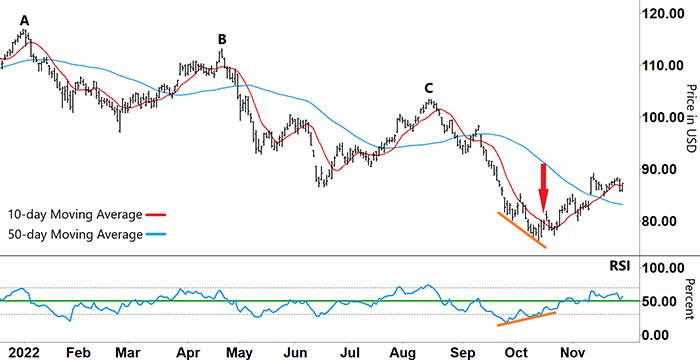 Each of those lower highs coincided with the Relative Strength Index (RSI) forming an inverse ‘V’ at or near overbought territory (upper grey dashed line).

And each counter-rally within the overall downtrend coincided with the RSI forming a ‘V’ out of oversold territory (lower grey dashed line).

However, it was another common RSI pattern that had our attention when we looked at IYR on October 19…

When these two are tracking in different directions, a change of direction is usually near.

If the RSI is trending higher (showing an increase in buying momentum), it’ll eventually start to push the stock price higher too.

And that’s exactly how things panned out…

IYR continued to rally as the RSI trended higher and broke back into the upper half of its range. Adding to the bullish momentum, the 10-day MA also broke back above the 50-day MA.

So what am I expecting around here?

Right now, the RSI is tracking right along support…

For IYR’s rally to continue from here, the RSI needs to remain in the upper half of its range. The longer it can remain in this range, then the longer any rally will be.

However, if the RSI falls through support and gets stuck in its lower half, then we can expect the current rally to fizzle out.

I’ll also be watching the action of our MAs…

To confirm any up move, we’ll also need to see the 10-day MA accelerate further above the 50-day MA.

If the RSI can bounce off support and the 10-day MA continues to track higher, then the current up trend that began in October could play out further.

P.S. Next week, I’m making a big announcement to reveal how you could make yields 750% greater than most savings accounts.

While most folks are leaving their cash on the sidelines to avoid market volatility, inflation is eating away its value. And though some in the media are eager to declare victory over inflation… most of us can see we still have a ways to go.

Treasury bills… savings accounts… and even dividend stocks are offering yields near less than 4%… 2%… or lower… But that’s just not enough to outpace inflation.

That’s why on Wednesday, December 7 at 8 p.m. ET, I’m holding an exclusive briefing called The 750% Boost. I’ll explain how I’ve used a different kind of investment instrument to get a steady stream of income since 2011.

It’s not options… stocks… crypto… or anything most have heard of. You can automatically RSVP to attend by clicking right here.

In today’s mailbag, we’d like to welcome Eliza to options trading with One Ticker Trader…

Larry, I’ve never traded options, but I’m willing to try your recommendations. Thank you for the clear-to-understand opening lesson!