One high profile stock (and FAANG member) that has been on a roll these past couple of years has been streaming giant, Netflix (NFLX)…

Hit shows like Tiger King and Squid Game – on top of the millions stuck at home due to COVID – saw its subscriber numbers (and stock price) strongly grow. From just August to November last year, Netflix rallied some 40%.

However, as you can see in the chart below, after hitting its all-time high on November 17 (at just over $700), shares in Netflix ran into a brick wall. In the space of just two months, Netflix shares have lost one-quarter of their value.

And with Q4 earnings due tomorrow after the market close, it’s fair to say that any surprises will only add to the volatility in Netflix’s share price…

Just take a look at the NFLX chart… 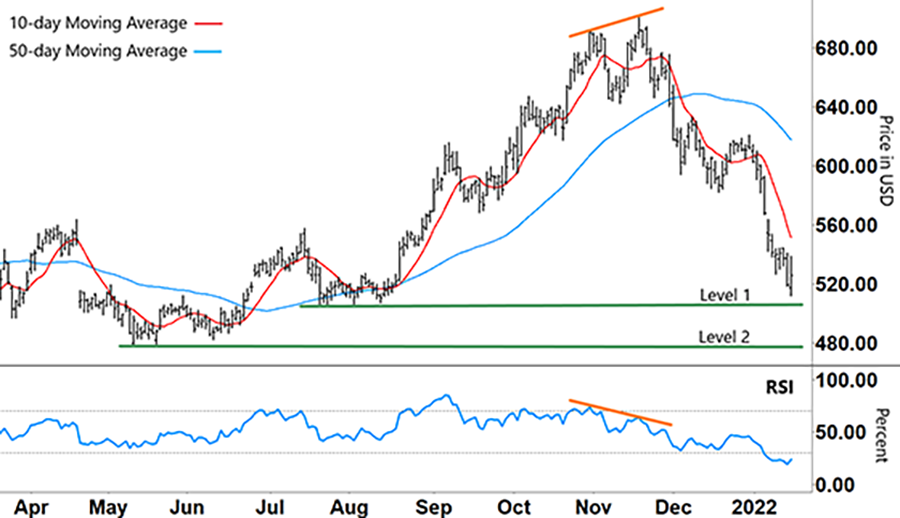 When Netflix hit its all-time high in November 2021, it was already showing declining momentum. At the same time the share price rallied from its peak in late October to the November high (after a brief pullback), the Relative Strength Index (RSI) was heading down…

You can see the divergence between Netflix’s share price and the RSI by comparing the orange trend lines in the top and bottom half of the chart.

Remember that when the share price and RSI are heading in different directions, it’s often a precursor to a change in trend. That applies in either direction…

The 10-day moving average (MA – red line) crossing down over the long-term 50-day MA (blue line) in early December – along with the 50-day MA turning down – then confirmed Netflix to be in a downtrend.

The question for investors is: what happens from here?

As the chart shows, right now Netflix is closing right in on a previous level (Level 1) just above $500 (upper horizontal green line).

When Netflix formed a base at this price level back in August 2021, it went on to rally 40%. If it can again find support at this level – and Netflix’s Q4 earnings surprise to the upside – then it’s more than likely that we’ll see a strong bounce.

However, if earnings disappoint and Netflix fails to hold this first level, that brings Level 2 (lower green horizontal line) at around $480 into play. This is where Netflix previously found support in May 2021… and also strong support back in November 2020 (not depicted on this chart).

A break below this second level would likely see Netflix make another major leg lower and create the opportunity for a short trade. For now, we’ll wait and see.

The RSI has been trending lower for most of Netflix’s recent downtrend. The only significant countermove was when Netflix rallied against its downtrend in the latter half of December.

Right now, the RSI is well into oversold territory, which is well below the lower grey horizontal line at 30%. To be clear, that doesn’t mean that Netflix is going to jump… A disappointing Q4 result will still likely see Netflix shares move lower.

What it does mean, though, is that Netflix could quickly rebound if sentiment changes along with its quarterly results. And that could provide a nice opportunity to capture a quick upside move.

What are your predictions for Netflix this year?