Retail sales are a major part of personal consumption and the biggest economic driver.

Any change in the nation’s retail spending will flow straight into the economy.

That’s why I keep a close eye on the sector.

And with this sector right at the crossroads, today I want to discuss how I see things panning out from here…

Because of unprecedented levels of money printing and interest rates at historic lows, retail sales grew exponentially throughout the two years of the pandemic.

We saw just how dramatic this growth was when we checked in on the SPDR S&P Retail ETF (XRT) last month.

And with the inflation genie out of the bottle, the Fed decided late last year that rates had to rise. This had an immediate impact on the retail sales sector… 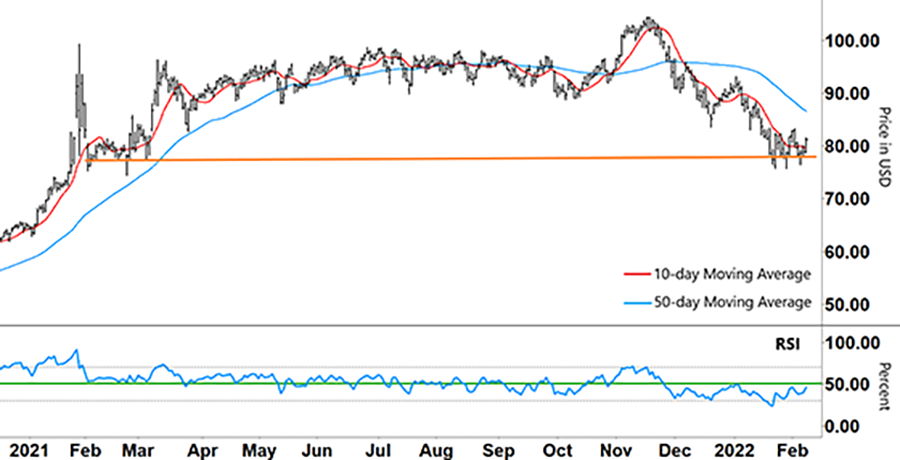 From late November to late January, XRT dropped over 25%.

Whichever way you slice it, that kind of drop takes a bite out of the economy.

During the fall, the RSI went all the way from overbought (above the upper grey line) to oversold (below the lower grey line).

And having trended sideways for the latter half of 2021, the long-term 50-day moving average (MA – blue line) rolled over and started heading down. The 10-day MA (red line) crossing down over the 50-day MA then confirmed the new downtrend.

However, you can see that XRT has been trying to form a base since January 24 (orange line). To have any chance of rallying from here, XRT will need to hold this support level.

So, what technical signals am I looking at?

The RSI has experienced increasing momentum since hitting its low in late January. After forming a ‘V’ (from oversold territory), the RSI has rallied and closed in on its support/resistance level (green line).

If (and when) the RSI hits that level, it’s going to face an important test…

For XRT to hold this support and then rally, the RSI will first need to break above its resistance level and hold. If this happens and momentum keeps building, it could give us a chance to enter a quick long trade (even if it is counter to the major downtrend).

Until the RSI breaks through resistance, we must remind ourselves that it’s in the lower half of its range. And that’s usually where the RSI remains when a stock is in a downtrend.

If the RSI remains in the lower half and XRT breaks below its support, we’ll likely see another leg down. It could also be the trigger to establish a short trade.

XRT experienced a strong fall. But it’s still trading at almost twice its pre-pandemic price. And that’s before all the heavy monetary stimulus is out of the economy.

If the Fed has to raise rates more than expected – or the economy hits its own hurdles – any downturn in retail sales could really start to gain steam.

What are your expectations for the retail sector?