It’s hard to think of a sector that has suffered more from the microchip shortage than auto manufacturers.

The shortage certainly put auto engineers to the test…

Factor in the already slowed (and sometimes shut down) production lines by COVID, and 2021 could go down as one of the industry’s toughest years…

But while Tesla (TSLA) and General Motors (GM) stock finished the year sideways, shares in Ford Motor Company (F) went for a run. Ford shares rallied over 135% – enough for its market cap to exceed GM’s for the first time in five years. 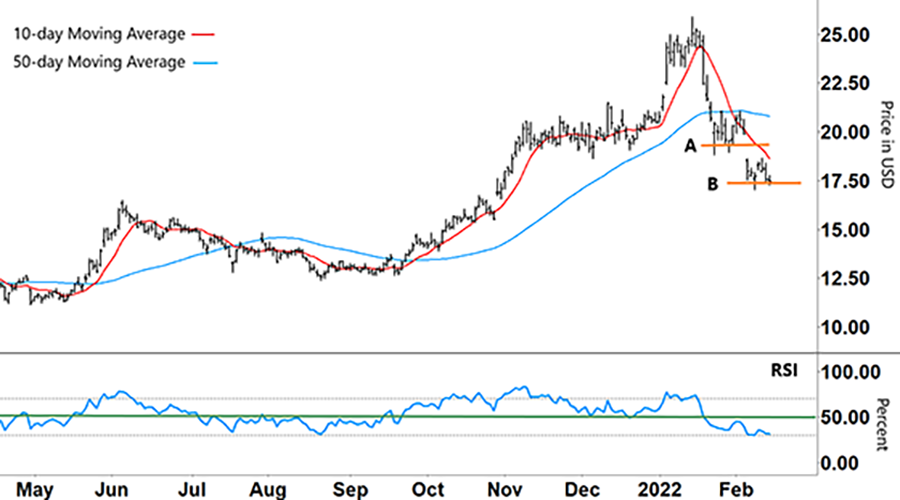 Its share price doubled in just four months (from September through mid-January) when it hit a multi-decade high of $25.87. That’s the kind of move you might expect more from a tech company than an auto manufacturer.

However, since then, Ford’s share price has really felt the pinch…

The sharp decline saw the 10-day moving average (MA – red line) cross down over the long-term 50-day MA (blue line)… which is typically a bearish signal.

After finding some short-term support at ‘A’ (upper orange line), shares in Ford gapped down even further when it released mixed earnings results on February 3.

While revenue was slightly higher than analysts forecast, adjusted earnings per share (EPS) came in well below expectations.

Having fallen after those results, Ford shares are now trying to hold support at ‘B’ (the lower orange line).

So, after such a long run-up (and now a sharp correction) what can we expect from here?

One of the things I’m watching is the Relative Strength Index (RSI – lower portion of the chart).

From its January high to its post-results low, the RSI has fallen from overbought to oversold territory.

While that might see buyers come into the market and help Ford shares find a short-term base, we’ll need to see a kick-up in the RSI if its shares are to rally.

Right now, holding support at ‘B’ is its priority. A break below that could see shares next testing the $15 level.

You’ll notice that back in July and August 2021, when the RSI last went into (or near) oversold territory, shares only rebounded slightly. That’s because the RSI was in the lower half of its range, and Ford shares were trending lower.

Only when the RSI broke above the green line and the 10-day MA crossed up over the 50-day MA in September did Ford’s rally get going. We’ll need to see a repeat of that if Ford will rally from here.

Quite simply, after such a stellar run where demand (spurred on by record-low rates) far outstripped supply (exacerbated by microchip and supply shortages), investors are starting to wonder if Ford’s profits have already peaked in this economic cycle.

The perception is that next year, the microchip shortage will continue. And Ford will need to spend billions as it transitions to electric vehicle (EV) technology.

For Ford shares (and the broader market), that means it’s all shaping up to be a very interesting year. The good news for us is that means there will be plenty of trading opportunities in both directions.

Thanks so much for sharing your knowledge in the eletter. I appreciate the insight on the quick and to-the-point topics. Sometimes I like to give previous issues a quick review if I haven’t used the information recently.

I look forward to gaining more knowledge just as I start my retirement years. Thank you!