Of all the different components used to calculate inflation, the most basic (and important) one is food.

And with food inflation rising at over 5% a year, many households are feeling the pain of increasing food prices, especially meat…

Red meat, poultry, fish, and eggs have increased on average 11.9% over the past 12 months. That’s almost double the headline inflation (CPI) rate of 6.2%.

These price rises also apply to the most basic raw food ingredients. Corn is up almost 28% from just a year ago… And wheat is up even higher at 31%. As the basis for so many food products, it’s no wonder that food inflation continues to rise…

When we last checked out WEAT’s price chart (red arrow below), the Relative Strength Index (RSI) was right on the verge of overbought territory (above the upper grey horizontal line)… 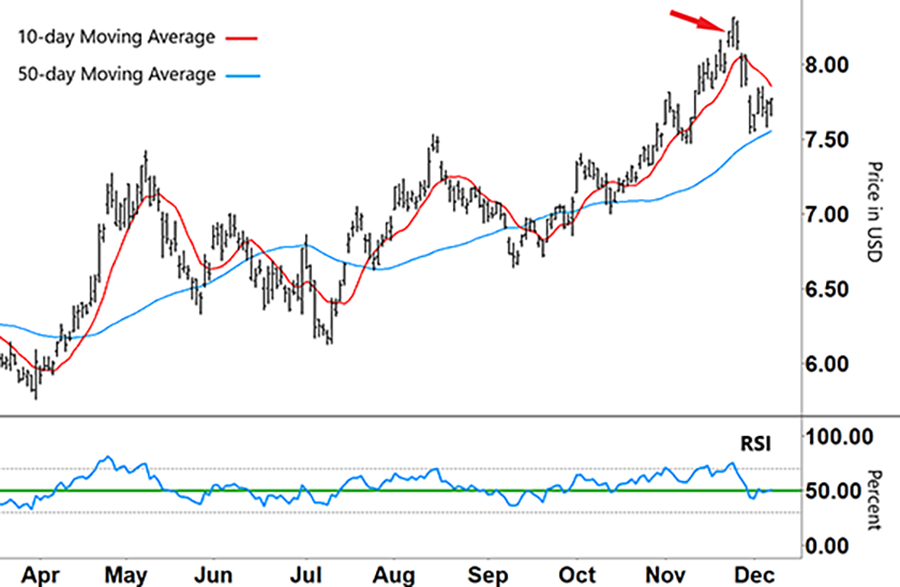 Since then, the RSI formed an inverse ‘V’, sending WEAT’s share price lower…

We also noted how WEAT often moves in cycles. As you can see on the chart, WEAT goes through pullbacks (countertrends) roughly every few months – from May into June, August into September, and most recently in late November.

In the two previous cycles, the 10-day moving average (MA – red line) peaked a long way above the long-term 50-day MA (blue line). Then, as WEAT’s share price peaked and fell, the 10-day MA crossed down over the 50-day MA before selling pressure eventually fizzled out.

With the current pullback, the 10-day MA is still firmly above the 50-day MA.

You’ll also notice a pattern with the RSI… In both previous down cycles, the RSI failed to hold above the 50% support level (green line). Instead, selling momentum continued to pull the RSI and the stock price lower.

So, what will happen from here? Let’s take another look at the chart…

As you can see, having fallen briefly below its support, the RSI is now right on top of the green line.

If the RSI can hold above the green line and move higher, that means the current pullback could be over for now. If that up move were to then gain momentum (increase in RSI), then the next test for WEAT would be to take out its November high ($8.31).

However, if the RSI fails to hold the green line and instead continues to trend down, then that means the current pullback still has a way to go. What would add further momentum to the downside would be the 10-day MA crossing down over the 50-day MA…

For that to happen, first we’d need to see WEAT’s share price fall below the 50-day MA. Right now, it’s still hovering above the 50-day MA.

Either way, the price action – and potential trades – over the coming week all hinge off the RSI.

Just remember that you don’t usually use a futures-based ETF (like WEAT) for a buy-and-hold investment… They’re better suited to active trading instead.

Do you think WEAT will rally in 2022, or will there be a move down?