With key inflation numbers due Friday, policy makers will be preparing to burn the midnight oil…

And since the last Federal Open Market Committee (FOMC) meeting of the year kicks off next Tuesday, they’ll only have a few days to get through all the latest inflation data.

After inflation jumped to 6.2% last month – a 30-year high – the upcoming report will go a long way in guiding the Fed’s monetary policy (asset purchase taper and interest rates) as we head into 2022.

But while the Fed concerns itself with the broader economic picture, consumers will be more worried about things like food and gas. With food costs continuing to increase, the fall in the oil price over the past month has at least provided some relief.

As the oil price fell from its recent highs, however, so did another sector that often tracks it closely… the oil services sector. It’s a sector we’ve been following closely over the past couple of months.

When we last checked out VanEck Oil Services ETF (OIH) three weeks ago (red arrow below), we saw that OIH’s fall was gaining momentum… 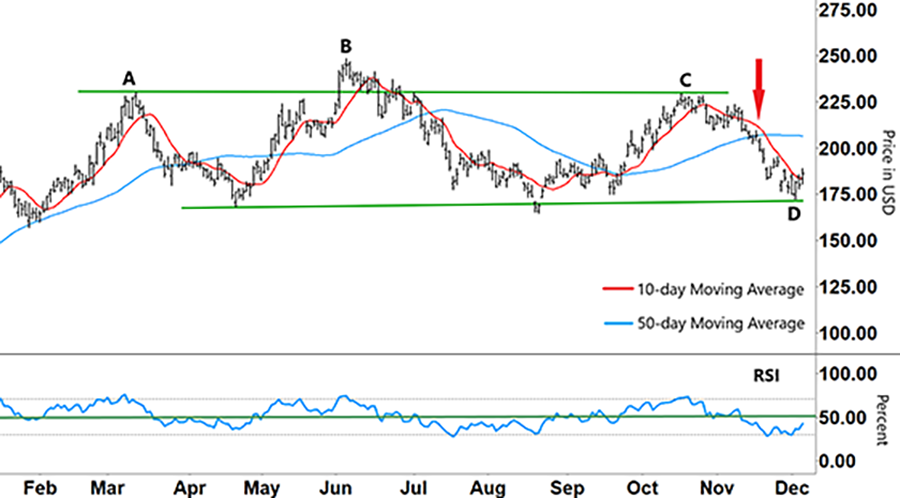 The Relative Strength Index (RSI) had broken below its 50% support level, and the 10-day moving average (MA – red line) was just in the process of crossing down over the long-term 50-day MA (blue line).

From there, the next test for OIH was the price level represented by the lower green horizontal line in the chart (D). As you can see, OIH hit this level in the past week.

This level is important because it represents the completion of a head and shoulders pattern, which is often an indication of a major reversal.

This pattern began all the way back in March (A) when the first shoulder was formed. (Note: ‘B’ is the head, and ‘C’ is the other shoulder). This price level at ‘D’ (also known as the neckline) now becomes critical as to what plays out from here.

As you can see, OIH traded down to and bounced off this level. This bounce coincided with the RSI going into oversold territory.

In fact, the RSI began flattening out just prior to this, hinting at declining selling momentum… and a potential change in direction.

Right now, though, the bounce in OIH is still in its early days. OIH is still very close to the lower green line…

However, if the RSI fails to break through that resistance and instead heads lower, then all eyes will be on the lower green line.

Remember that with the head and shoulders pattern complete, what sets the reversal trade into motion is a break below that green line.

If OIH breaks strongly below that line (and that green line changes to resistance), then that has the potential to set up a big move down. We’d aim to capture that move by entering a short trade.

However, if OIH fails to break below that green line – meaning that it remains as a support level – then that means the head and shoulders pattern is morphing into a sideways pattern.

While that might not offer the same profit potential as a big move down, it could still provide the opportunity to generate mean reversion trades.

Either way, the price action around that green line will become crucial as we head into the end of the year… It could also throw up plenty of trading opportunities.

I’ll continue to watch it closely as I scope out future trades.

I always enjoy hearing from my enthusiastic readers. Here are some of their responses…

Thanks for your recent winning streak in the Opportunistic Trader. I did benefit and pray for continued quad witching success.

Thank you for the new format in The S&P Trader. As a lifetime member, this new format is really helping my account and knowledge base. I know there have been growing pains with this product, but I believe this is the winning formula. Keep up the good work! Thanks.