For nearly a decade, it seemed as though the markets had forgotten all about inflation.

At one point, there were talks of getting rid of the inflation target altogether.

But nowadays it seems like it’s impossible to forget about inflation, or the damage it can cause to the markets.

Once inflation hits, it often takes a series of interest rate hikes to get inflation back in check – if at all.

That can lead to some serious selling in the market, sending stocks much lower. So, the spike in inflation this year caught my attention.

Because of the damage inflation can cause, I like to keep a close eye on it.

But instead of waiting for the monthly Consumer Price Index (CPI) report, I like to get ahead of the market by watching the infrastructure sector.

Infrastructure is less vulnerable to inflation (and higher interest rates) than other sectors. That simply comes down to how infrastructure deals are structured.

For example, toll road operators and airports typically have lengthy contracts that allow for CPI adjustments. So, they can increase their charges as inflation rises.

This allows infrastructure to act as a hedge against inflation.

One ETF that represents this sector is the SPDR S&P Global Infrastructure ETF (GII). GII owns 75 infrastructure assets around the globe.

Let’s look at the GII chart… 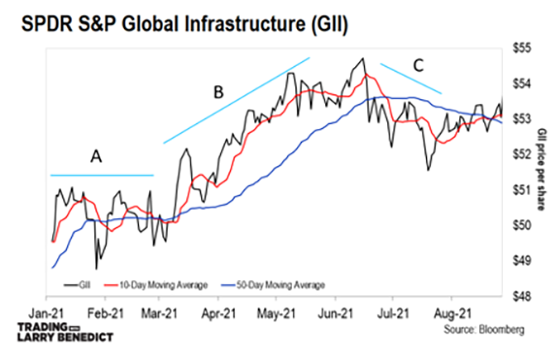 Then, when inflation started to jump from March onwards, GII began to rally (‘B’).

This usually happens because professional money managers don’t have the luxury of sitting out the market. Unlike private investors, they can’t be “all in”, or “all out.”

Instead, they rotate out of one sector and into another. The last thing they want is to be overweight in growth stocks when “growth” disappears into thin air.

However, with all the talk of inflation being “transitory,” the heat came out of GII. Enough to shake buyers out of the market. Then, we saw GII fall around 7% from mid-June to mid-July (‘C’).

Now, though, GII has once again been grinding higher.

That’s usually a bullish sign… but perhaps it’s still too early to consider a trade.

As we get closer to the next CPI release in mid-September – you can be sure I’ll be watching GII like a hawk. That’s because there are two potential trade setups on the table…

If inflation does turn out to be “transitory,” then GII and other infrastructure assets could be heading for a fall – creating a potential short trade.

However, if inflation continues to jump higher, you can expect big money to again rotate out of other assets, and park their money in assets like GII.

In that case, a long trade could be in the cards.

Either way, you can be sure of one thing… inflation is now very much back on professional investors’ minds and it’s creating setups in both directions for us to profit.

I’m going to keep an eye on this one.