Today, I want to revisit a stock that sits right at the center of any change in interest rates…

Back then, we saw how the prospect of higher rates had already seen money flowing into to safe-haven assets like government bonds.

Rather than just looking at interest rate moves in isolation, I view them in the context of money flow…

Meaning, how a change of interest rates causes the transfer of funds between different asset classes. 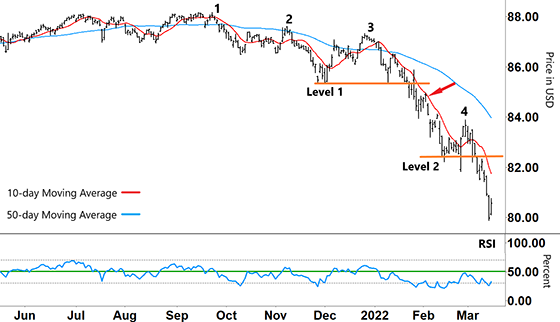 The 10-day MA (red line) accelerated further away and below the long-term 50-day MA (blue line).

HYG wasn’t able to form a short-term base (level 2) until the RSI bounced from oversold territory (below the lower grey line).

With the RSI finally finding some momentum, it pushed up towards its resistance (green line) but failed to break above…

This action capped a short-term bounce in HYG and established a new lower high (4) – confirming a bearish trend.

From there, the RSI rebounded lower off resistance, causing HYG to again break its support and sell off strongly.

This is a classic cycle that repeats in a trending market… whether up or down.

That is, a major move forming the overall trend – in this case down – with a series of shorter (and sometimes sharper) countermoves along the way.

Now, with the RSI back in oversold territory, we will see over the coming days if this pattern repeats.

So, what am I looking for around this level?

Well, first will be the action around the RSI…

If the RSI breaks out of its oversold signal and forms a ‘V’, we can expect HYG to rally. If we’re nimble enough, that could provide a quick trade to the long side.

However, I’ll be watching closely for what happens after that…

If the RSI rallies to resistance and fails to break through – meaning that HYG likely forms another lower high (5) – then we need to be ready to sell into that strength.

As we’ve seen repeatedly in this bearish pattern, when HYG breaks support (along with declining momentum), it can sell off strongly. That would provide an opportunity for a profitable short trade.

With interest rate rises firmly on the Fed’s agenda for this year and into the next, we’re going to see plenty of action in interest-rate sensitive stocks like HYG…

Fortunately, it’s the exact kind of scenario that will provide plenty of trading opportunities in both directions.

Have you shifted your money into safe-haven assets like government bonds recently?