With the current inflation rate at 6.2% and rising in the U.S., the cost of living has already become a major issue for many consumers…

From the cost of basic food items (in particular, meat) up 5.4% for the year – to filling up your tank (gas prices are up 50%) – many folks are already starting to feel the effects.

However, the recent price action in oil has me watching this sector even more closely than usual. And hopefully it could soon offer relief for suffering motorists.

Having hit seven-year highs towards the end of October, the price of West Texas Intermediate Oil (WTI) has now dropped 10% in the space of a few weeks. Last week represented WTI’s biggest weekly fall since August. 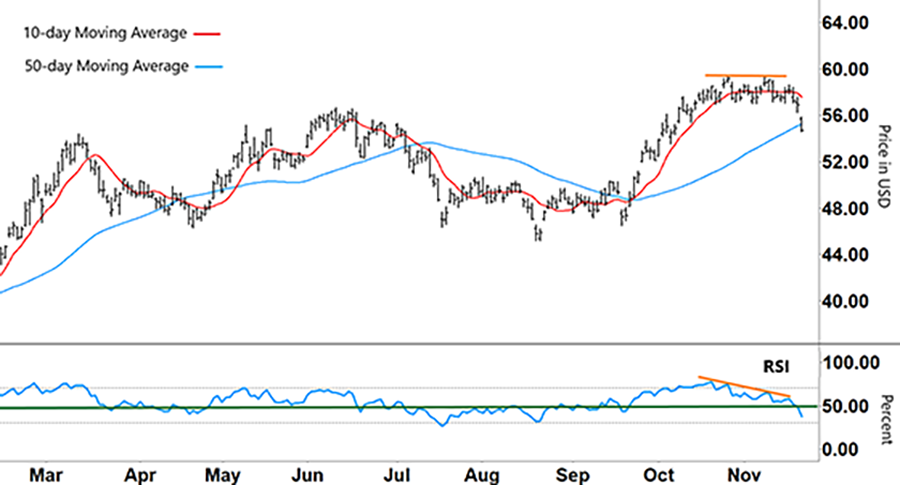 After topping out at $59.41 in October, XLE is already down around 8%, having broken below $55 recently.

That fall has put XLE’s share price just below the long-term 50-day moving average (MA – blue line). If XLE continues to fall lower from here, then we can expect to see that 50-day MA also roll over and turn down.

However, the interesting (and tell-tale) pattern that preceded this fall was the divergence between XLE’s share price and the Relative Strength Index (RSI). This divergence is represented by the two orange lines.

The RSI peaked on October 20 with an overbought signal, just six days prior to XLE topping out at its October 26 high. In the past week or so, the fall in the share price has accelerated as it plays catch-up to the fall in the RSI.

The RSI has now broken below its own support level (green line at 50%), adding to this selling momentum.

So, what am I looking for from here?

The first test is how XLE reacts to the RSI. Right now, the RSI is falling sharply. It could soon hit the oversold line (lower grey horizontal line at 30%). If the RSI fails to bounce, then we can expect to see XLE fall further.

If that selling gains momentum, then XLE could re-test its August lows.

The other thing I’m watching are our two moving averages. If the short-term 10-day MA (red line) was to cross down below the 50-day MA, then that would confirm a short-term change in direction for XLE.

For a long-term downtrend to emerge, we’d also need to see the long-term 50-day MA roll over and fall.

The chart of XLE shows how quickly sentiment can change, especially when it comes to oil. Back in October, as WTI hit its highs, there was all kinds of speculation about just how high oil could go.

Now, with news of more pandemic lockdowns in Europe (causing lower demand) – plus governments globally pushing for the release of oil reserves (more supply) – suddenly that sentiment has turned…

That’s why instead of listening to speculation, I’ll watch the chart and let it be my guide.

Do you think inflation will continue to rise, or will oil prices spike?