The property sector had a tough start to the year, much like the rest of the market.

Shortly after peaking at its all-time high on December 31 last year (‘A’ on the chart below), the iShares U.S. Real Estate ETF (IYR) started 2022 selling off hard…

After a short bounce in early February, IYR fell again. By February 24 – the day of the Ukraine Invasion – IYR’s opening price represented a 17% total fall from its all-time high in December (A).

However, IYR has begun to grind higher since then.

When we last checked on it around a month ago (red arrow), IYR was consolidating around support.

After a promising month of price action, today I want to look at what’s coming next for the property sector… Because this past week our key technical indicators showed some bullish signals.

So, let’s check out the chart of IYR… 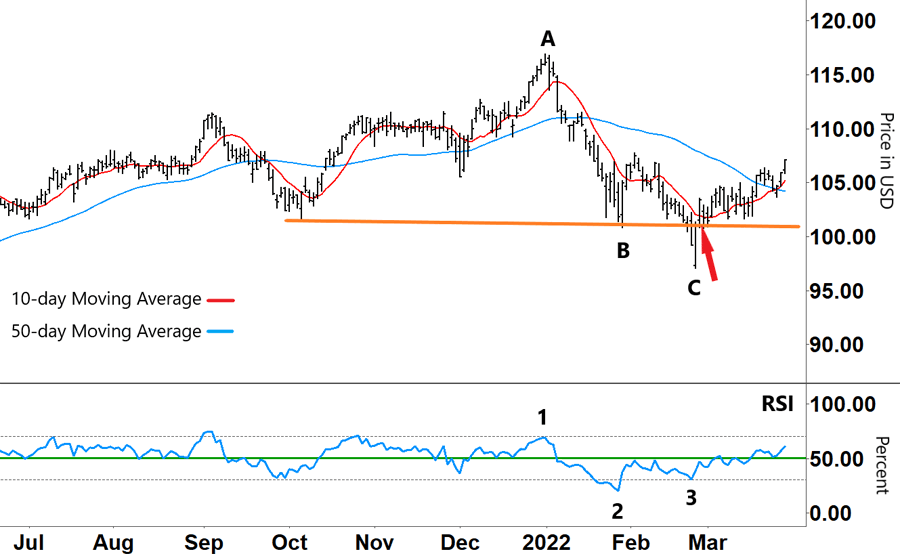 The longer-term trend has been heading lower since mid-January. That’s shown by the 50-day moving average (MA – blue line).

You can also see what caused that downtrend to get underway…

First, the Relative Strength Index (RSI) gave an overbought signal (‘1’ on the lower half of the chart) when it inverted from the upper grey line and then headed lower.

And second, the 10-day MA (red line) crossing down over the 50-day MA confirmed the downtrend. (Note the same pattern in yesterday’s essay where the RSI gives a signal well before the MAs cross over.)

With the RSI well into oversold territory (below the lower grey line) at ‘2’, IYR bounced at ‘B.’

However, the rally failed to gain traction as the RSI kept running into resistance (green line) and failed to break above it.

Recently, with divergence between IYR’s share price (‘B’ to ‘C’ making a lower low) and the RSI (‘2’ to ‘3’ showing a higher low), IYR changed direction with the current uptrend getting underway.

So, what will drive IYR’s share price from here?

Since bottoming at that lower high at ‘3’ – and after trying multiple times – the RSI recently broke back through resistance. Importantly, the RSI recently tested that same level (now support) and subsequently moved higher…

We know that the RSI needs to stay in the upper half of its band (above the green line) for this rally to gain further momentum.

If the RSI were instead to fall back below the green line, we can expect this rally to falter.

The other indicator adding to the bullish sentiment are the MAs. Over this past week, the 10-day MA has crossed back above the 50-day MA.

For this rally to get going, first we’ll need to see the 10-day MA keep moving further above the 50-day MA. And second, the 50-day MA will also need to change direction (go up).

Given the action of both the RSI and MAs, right now the emerging uptrend is looking promising…

However, we need to remember not to get too far ahead of ourselves.

Given that we might see a 0.5% rate rise in just another couple of weeks – and plenty of rate rises behind it due to inflation – this rally will face plenty of challenges ahead.

Have you been able to profit from real estate this year?