While the broader market’s fall this year has received plenty of attention, one sector hit the wall well before that…

The iShares Biotechnology ETF (IBB) peaked back in August 2021 at its all-time high (‘A’ on the chart below). From there, it began to fall heavily.

Some biotech stocks moved higher from COVID research funding, while others suffered as clinical trials and sales activities were delayed by the pandemic restrictions.

But after forming a base over the past couple of months, the chart looks promising…

So, today I want to discuss what’s next for this sector.

You can see the scale of the selloff below… 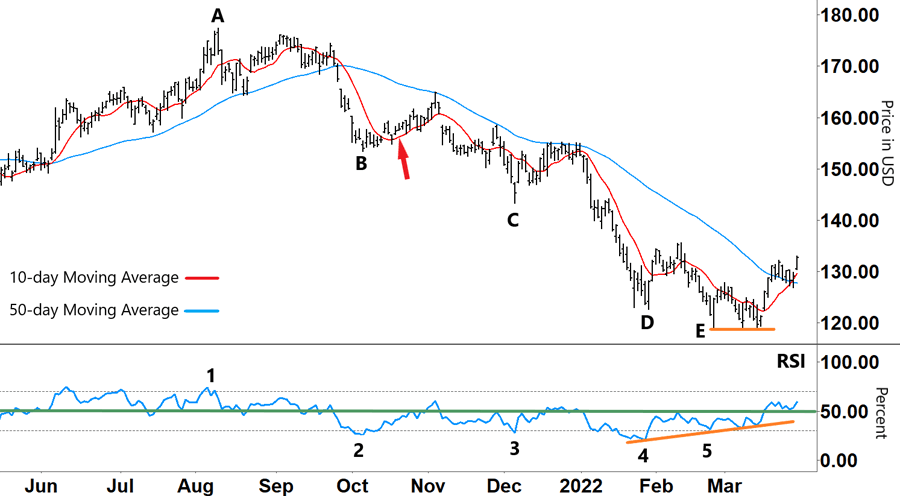 The downtrend began to gain traction from there, with both IBB and the RSI making lower highs and the 10-day moving average (MA – red line) crossing down over the 50-day MA (blue line).

As you can see, it wasn’t only one-way traffic…

When we checked in on IBB back in October (red arrow), IBB had formed a base and was rallying off its then-low at ‘B’. That coincided with the RSI rallying out of oversold territory at ‘2’ (below the lower grey line).

A similar pattern then repeated (from ‘B’ and ‘2’) at ‘C’ and ‘3’. This time, after regularly testing resistance, the RSI failed to break and stay in the top half of its range.

Like the broader market, IBB’s fall began to accelerate as we rolled into 2022. You can see how steeply IBB fell by the rate at which the 10-day MA moved further below the long-term 50-day MA.

However, in late February the chart pattern changed…

While IBB formed a base from that low at ‘E’ (upper orange line), the RSI started to show increased buying momentum as it trended higher (lower orange line). Meaning, the RSI made a series of higher lows.

The RSI broke back into the top half of its range in mid-March. And despite testing it several times, that support level is holding.

Our two MAs add to the bullish sentiment… In this past week, the 10-day MA has broken back above the 50-day MA.

Right now, this upward move is still in its early stages.

But if the 10-day MA begins to accelerate above the 50-day MA – and the RSI can stay in the top half of its range – this emerging rally could really gain momentum.

Are you expecting a rebound in biotech?