This strategy makes up my index trading service, The S&P Trader. And it lets us profit when an index like SPX takes a tumble or even just trades sideways.

When we checked out the S&P 500 Index (SPX) yesterday, we saw an example of when you could use a bear call spread…

That was when SPX ran into resistance (at 1 and 2)… 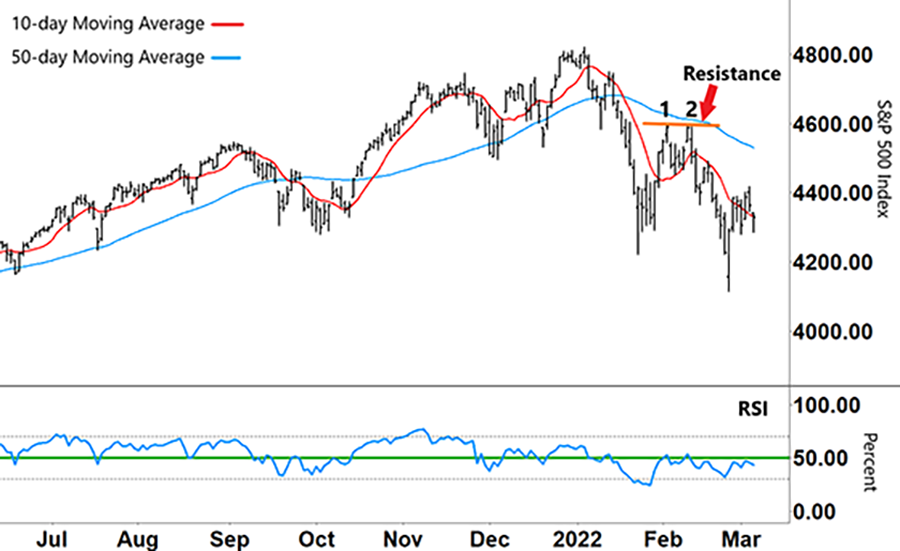 In our example, we collected $25 by selling a call option on SPX with a strike price at 4,600.

As you can see, SPX traded down and continued to trend lower after hitting resistance. So, depending on our expiry date, our option (at 4,600) wouldn’t have been exercised.

However, when selling an option, we obviously can’t know for sure what’s going to happen next.

What if SPX broke through that resistance and that price level changed into support instead?

If that happened, we could be in for unlimited losses…

And that’s where the second leg of the trade fits into the picture.

To reiterate what I wrote yesterday, you must always place both legs together as a single trade.

Although the two options have the same expiry date, the bought call option has a lower premium. That’s because it’s further away (higher) and has less chance of being exercised than the sold call option (lower strike price).

Because of that, selling a bear call spread generates a credit to your account.

Continuing our example, if we sold our SPX call option at 4,600 and received $25 for the first leg, we could buy a call option with a 4,650 strike price for a premium of $10 on the second leg.

Because it’s a single trade (although it has two separate legs), we net the premiums together. In this example, with $25 received and $10 paid out, that’s a net credit of $15 for the trade.

The bought call option is basically the risk management leg of the trade. It covers you in case SPX rallies strongly (say 4,800).

Although in this scenario your sold call option is heavily underwater at 4,600, your bought call option at 4,650 is strongly in the money.

So, while a bear call spread has a capped profit on the net premium received, that’s the trade-off you make for using a strategy that comes with limited risk.

That’s why I use this strategy regularly at The S&P Trader.

When the markets become as volatile as they have been this year, limiting risk becomes even more of a priority for traders.

What has been your experience trading vertical spreads?