It’s been a brutal start for tech stocks this year.

Not even the biggest names on the market are safe…

Tesla is down around 30% since the start of January. Amazon has dropped nearly 20% over the same time.

Additionally, some of last year’s high-profile IPOs are now trading at a fraction of their float price.

The potential of even more interest rate rises is putting major pressure on the indices. The Nasdaq is already down 15% this year and the S&P 500 is down 10%.

So far, 2022 has been a stark contrast to last year where tech stocks drove the bull market.

That relationship between the mega-tech stocks and the broader market is something we’ve looked at a lot since last year.

In light of the current selloff, I want to examine how this is playing out… Because it’s now those same tech stocks pulling the market down.

For the broader market to hold up, we’ve previously discussed how important it was for industrial stocks to take their share of the load.

Based on the chart below, the last time (red arrow) we checked in on the Industrial Select Sector SPDR ETF (XLI), it rebounded lower off resistance (the upper blue horizontal line). And it was trading right in the middle of its trading channel on the green line… 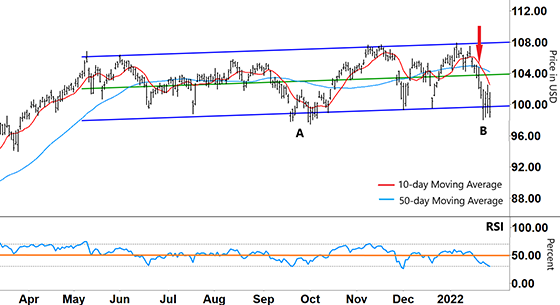 And with the Relative Strength Index (RSI) right on its support level (50% – orange line), we looked at two possible scenarios…

First, for XLI to rally back up to the top of its trading band, the RSI would need to bounce off this support.

And second, the RSI could fail to bounce and then break lower. We could expect XLI to fall around the $100 price target at the bottom of the trading range (lower blue line).

As you can see, the RSI broke lower, sending the share price right down to test support. With so much volatility around, XLI has been swinging in a wide range right around that support line.

For XLI to have any chance to consolidate and form a base so it can rally, it’s vital for XLI to hold this support level.

You can see the similarities so far in the current move (B) with that back in September-October (A). Back then, XLI repeatedly tested support before eventually rallying.

The catalyst for that rally came from increased buying momentum (RSI).

Right now, the RSI is again heading into oversold territory. Take another look…

If the RSI can repeat that pattern from ‘A’, then we could see XLI also bounce and rally off support. While that could be a potential setup for a long trade in XLI, it could also provide support for the broader market.

XLI might fail to attract buying momentum and break below support. This would set up a scenario for a short trade.

That’s why I’m watching the current price action like a hawk. What happens this week in XLI will be key in determining what direction the broader market heads from here.

What are your predictions for XLI?