With the global rout we’ve seen in stocks so far this year, investors are desperately hanging on for a market bounce…

Even Apple Inc (AAPL), the biggest stock in the market, has been caught up in the fall…

After gaining an impressive 34% during 2021, it only took a few weeks in January for Apple to fall over 10%… and lose more than $200 billion in value.

However, things appear to be turning around for the tech giant…

After forming a base at the start of last week, shares got a boost from a strong Q1 earnings report. The 11% growth in revenue and profits caused the share price to gain 7% on Friday. That’s its biggest one-day gain since July 2020.

With tech stocks leading the market rally since May 2021, Apple’s share price will be a major indication of the overall market over the coming weeks.

In the chart below, you can see how much Apple rallied in the last couple of months of 2021… 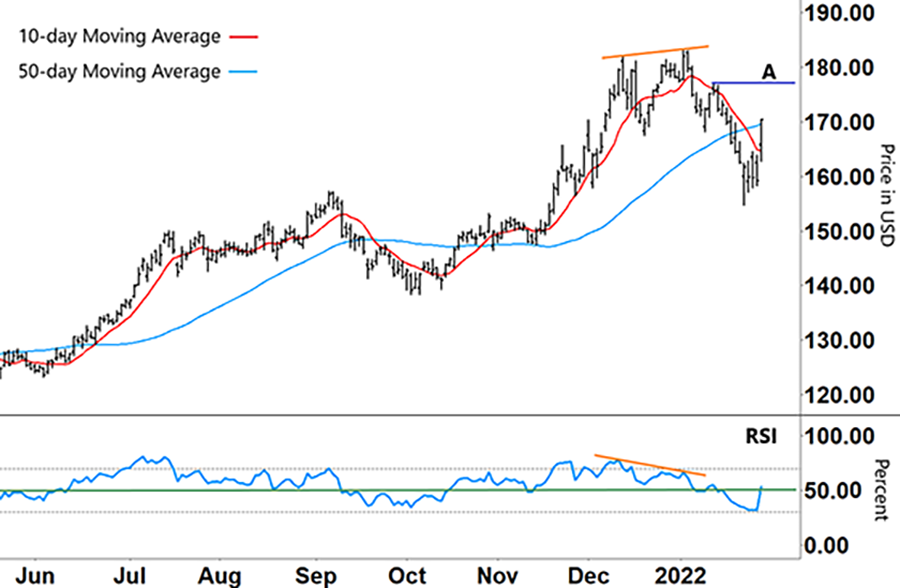 After trading flat from July to November 2021, Apple gained 20% in five weeks.

However, divergence (the orange lines) between Apple’s share price and Relative Strength Index (RSI) became a precursor to its fall. (This divergence often indicates an impending change in direction.)

After the RSI broke down through its own support at the green line (50% level), it bounced near the lower grey horizontal line (oversold signal). This bounce coincided with Apple’s share price bouncing off its January low.

As you can see, after that bounce the RSI is right back on top of the green line. If the RSI can break above this resistance level and hold it, then we can expect to see shares in Apple continue to move higher.

The first test will be to see if Apple can reach (and break above) the horizontal dark blue line at ‘A’. From there, for Apple to regain its momentum and return to its long-term uptrend, it will need to break above its all-time high from January 4 ($182.94).

However, the market is still very skittish…

If the RSI hits resistance and loses momentum, this current bounce could run out of steam and reverse. If Apple reaches ‘A’ but reverses, it could soon test the January low.

A break below that could be the start of a much bigger down move. And that would provide an opportunity to go short.

The other thing I’m watching are the two moving averages…

When AAPL dropped in January, we saw the 10-day moving average (MA – red line) break down below the 50-day MA (light blue line). With the bounce we saw on Friday, Apple closed back just above the 50-day MA.

For a rally in Apple to hold from here – and to reach its first target at ‘A’ – it will need to stay above the 50-day MA. Then if the 10-day MA were to cross back above the 50-day MA, that would give greater momentum to any upward momentum.

With high volatility set to continue, we’re likely to get chances to trade Apple in either direction. And with the market swinging wildly, remember to take profits off the table when you see them.

What are your predictions for Apple and the fate of the overall market?