One sector that I always like to watch is consumer discretionary.

It shows me how much consumers are spending on non-essential items. This helps me gauge the health of the broader economy.

But today, I want to look at the other side of the consumption equation – consumer staples.

Consumer staples are the essential items that form a part of our everyday lives such as food, beverage, and household products.

Initially, XLP held up relatively strong in 2022. While consumer discretionary stocks were tanking, XLP was rallying to its all-time high.

But after hitting that peak in April, it’s been a tougher journey for XLP. It’s now down, marking its yearly lows and catching up with the latest rounds of selloffs.

So, today I’ll discuss what I see coming next for XLP.

Let’s take a look at the chart… 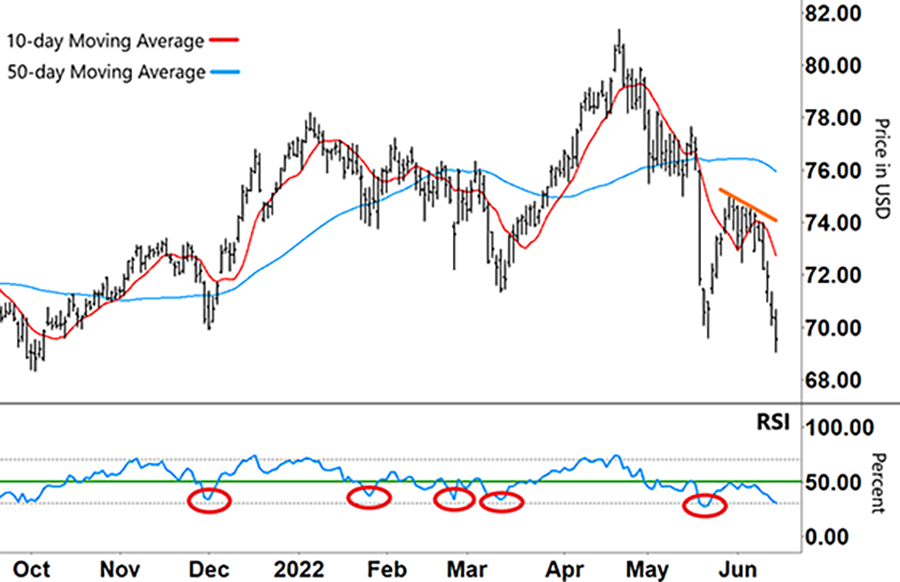 After a strong rally into the end of 2021, XLP spent the start of 2022 gradually drifting lower.

That down move began in early January, when the Relative Strength Index (RSI) rolled over from overbought territory (upper grey dashed line).

Once the RSI began to track lower, XLP continued to grind lower as well. Eventually, the RSI fell below support (green line).

However, around mid-March there was a temporary change in direction…

After rallying from just above oversold territory (lower grey dashed line), the RSI traded right up through resistance before topping out in overbought territory again.

This move drove XLP to its all-time high…

But after hitting that peak, XLP ran out of steam. Its initial down move resumed with the RSI forming an inverse ‘V’ from overbought territory.

XLP continued to fall as the RSI broke down through support before bottoming out in oversold territory. The 10-day MA also crossed back down below the 50-day MA confirming the downtrend.

After bouncing from its May low, the RSI tried breaking through resistance several times but failed. This caused XLP to top out at short-term resistance as it made a series of lower highs (orange line).

So now, with the RSI rebounding lower and XLP making yearly lows, what can we expect from here?

As you can see, the RSI is tracking near oversold territory again. In the coming week, I’ll be checking to see if the RSI can repeat a previous pattern.

On the chart, the red circles highlight this pattern on five different occasions. Each time the RSI formed a ‘V’ at or near the lower grey line – and bounced back toward resistance (green line) – XLP rallied.

Right now, a similar move by the RSI could provide the setup for a long trade. And we could soon see XLP back around $72-$74.

But as always, we must remind ourselves of this market’s extreme volatility. Sentiment can reverse in an instant.

That means our primary goal in the coming weeks is to capture short-term countermoves, rather than latching onto less probable long-term trends.

What is your sentiment toward XLP? Will consumer staples see another rally?