A couple of weeks ago, we took a close look at SPDR S&P Metals and Mining ETF (XME).

After trading flat in the last half of 2021, XME came into 2022 stuck in a sideways pattern.

That all changed in February…

XME broke through resistance and went on to rally 67% in less than two months. While the major indices were heading south, XME was trading at its highest level in over 10 years.

But on April 25 (red arrow on the chart), I wrote that the chart was flashing warning signals…

A change in direction was firmly in the cards…

That’s exactly how it panned out. Over the past couple of weeks, XME fell by around 20%.

Today, I’m going to discuss what’s next for this sector. So, let’s pull up XME’s chart… 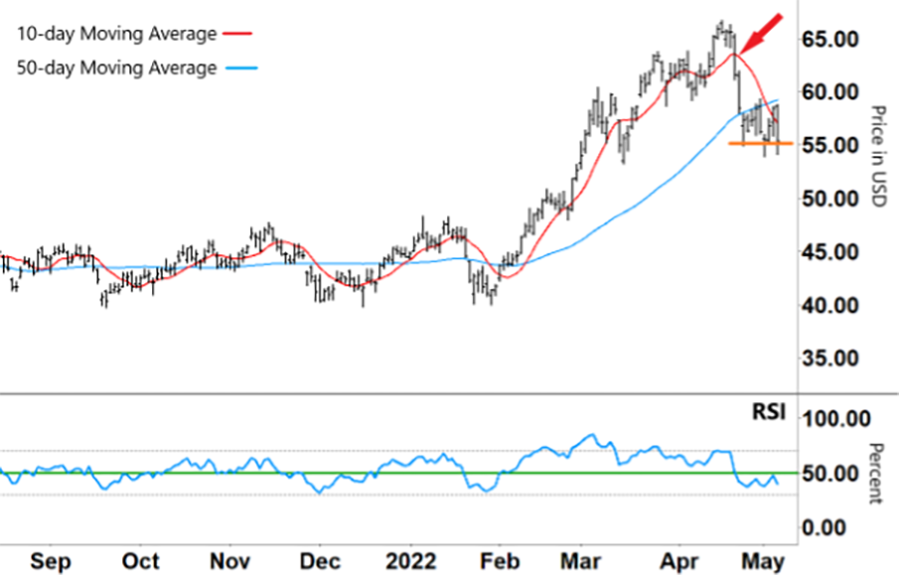 While XME made higher highs, the RSI made lower highs. This divergence eventually pulled the share price down.

The near-20% fall happened over three trading sessions… showing how quickly stocks can fall once buying momentum declines.

However, there are two key developments since we last checked XME…

First, the 10-day MA has now crossed back down over the 50-day MA (a bearish signal).

Second, the RSI has broken down through support (green line) and is now in the lower half of its range (another bearish signal).

The RSI recently re-tested what is now resistance, but so far has failed to break back above the green line.

After the sharp fall in mid-April, XME has been trying to consolidate around the $55 level (orange line).

For XME to move back higher, it must first hold this support. Then, the RSI will need to break back into the top half of its range for any up move to gain momentum.

If either of these scenarios fail, then that means XME has further to fall.

A break below support – along with the RSI remaining in its lower band – means XME could soon test the $50 level.

When stocks rally, they rarely go in a straight line. In its February to April rally, XME consolidated or retraced before moving higher again.

It works the other way too…

In a down trend, stocks fall before consolidating or retracing at a level. Then, they typically break lower before repeating the pattern.

That’s what I’ll be looking out for with XME over the coming weeks.

If XME breaks below support – along with the RSI showing declining buying momentum – we could have an opportunity for a short trade.

What are your thoughts on the XME chart pattern? Do you think it will fall?