Consumers are all too aware of rising prices in things like food and gas.

But sectors like metals and mining have also seen strong inflation.

With supply unable to match soaring demand, the prices of aluminum, copper, and steel have gone through the roof.

When we last checked in on the SPDR S&P Metals and Mining ETF (XME) , we saw this supply/demand mismatch in action (red arrow on the chart below).

XME went on an absolute tear after breaking through resistance in February. From its January low to its recent high, XME rallied a whopping 67%.

But earlier this month, I wrote that there were emerging signals warning me about a coming change.

Those signals became stronger over the past couple of weeks. Today, I want to update you on what I see happening next.

Let’s look at the XME chart… 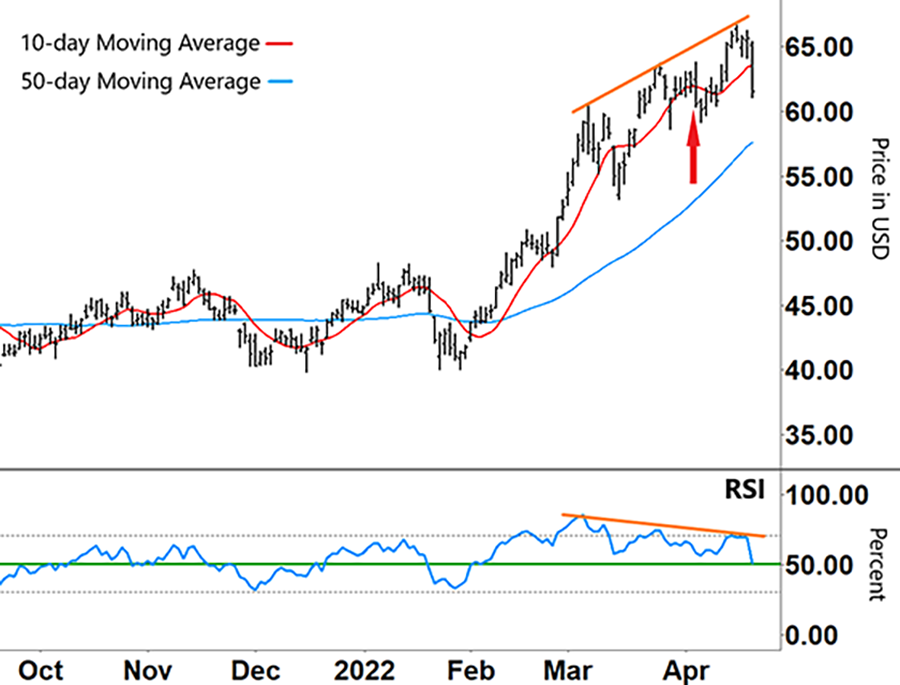 You can see just how strong the recent rally has been.

When we last looked at XME, there were signs of growing divergence between its share price and the Relative Strength Index (RSI), shown by the orange lines.

Since then, this diverging pattern has become stronger.

XME went on to make a new high on April 18, while the RSI made a lower high.

This divergence is important.

Although a stock might make new highs, eventually that uptrend will reverse if momentum starts to wane. And that’s what I was looking for when we last checked XME.

After making that lower high, the RSI fell back on support (green line) – a key level.

So, how do I see things playing out from here?

Well, if the RSI holds support and stays in the upper half of its range, then the current down move could be a short one.

Don’t forget that momentum works both ways. For a down move to gain traction, the RSI needs to break into the lower half of its range.

If the RSI does break below the green line and stays there, then this current fall will be larger. This would provide an opportunity for a short trade.

With XME trading lower off its recent high, the two MAs look to be converging. This often happens when a trend loses momentum.

If the 10-day MA breaks down over the 50-day MA – and the RSI moves into and stays in the lower half of its band – that’ll provide evidence that this emerging downtrend has further to go.

What other sectors do you think inflation will affect?