A few weeks ago, one of the most mundane stocks in the market was experiencing a period of sustained volatility.

On July 14 (red arrow on the chart below), we took a close look at the Utilities Select SPDR Fund (XLU). At the time, it had been through six major moves for the year.

Since then, XLU drifted lower before bursting higher in yet another fresh move. Now XLU is about to retest a key level.

So, today I’ll discuss how things will play out from here and how traders can increase their chances of profiting from these moves. 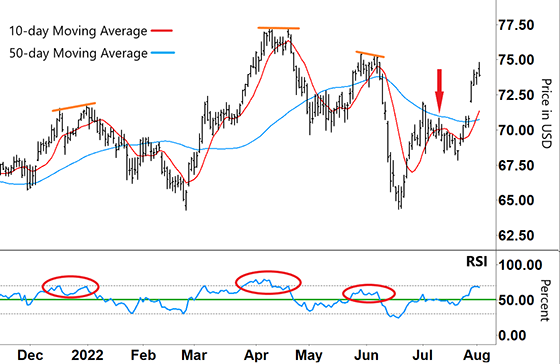 On July 14, the RSI was tracking right in the middle of its range (on the green line). We were looking to see whether it could repeat a previous pattern by moving down into oversold territory (lower grey dashed line) and leading XLU to retest its yearly lows.

However, instead of repeating that pattern the RSI burst back through resistance into overbought territory (upper grey dashed line). See how volatile this stock is?

But the good news is that this current action could be setting up XLU for another potential trade.

That’s because entering a trade when the RSI is reversing from its extremes (overbought or oversold) vastly improves our chances of success when the stock price reverts to its mean.

So, what am I looking for from here? Take another look…

Although these peaks eventually reversed, they didn’t do so right away. In fact, it took several days (if not weeks) for the reversal to play out.

Those actions were also reflected in the RSI (red circles).

In each case, the RSI tracked sideways on or near overbought territory for a similar period before making a sharp move lower. This is what drove the stock price down.

And that’s exactly what I’ll be looking for with XLU.

If this previous pattern repeats and the RSI tracks sideways in overbought territory, then I’ll prepare for a short trade. However, the chart is telling us patience is key.

Meaning, I’ll consider entering a short position only when the RSI makes a clear move back toward the middle of its range.

When the markets swing all over the place, it’s easy to get pulled into a trade.

But by waiting for a stock to reach the extremes of momentum, we can increase our odds of making profits when that stock reverts to its mean.

P.S. We can also increase our odds of profiting in volatile markets by using my approach of not investing the traditional way. You see, it has nothing to do with buying and holding onto random stocks, and everything to do with trading just a single ticker. It flies in the face of everything a regular financial planner would ever tell you…

The best part is that it’s how I posted gains of 23% during the 2008 financial crisis, while the stock market fell 37%. And I did it again in the first half of this year… my readers saw double and even triple-digit gains.

I call it the One Ticker Retirement Plan, and it’s designed to help you make all the money you need – in any market – using just one ticker at a time. Click here to learn about all the details because in this market, you’ll need it.

How have you adapted your trading strategies to today’s increased volatility?