2022 sure has seen a big increase in volatility.

And few stocks have been as volatile as Tesla (TSLA).

Then, after rallying at almost right angles in March, TSLA peaked in April before again seeing its share price smashed. This time TSLA fell even harder – dropping 46% in just six weeks.

However, by late May TSLA had been oversold and starting to find support. And from there began to rally higher.

With TSLA about to test a key level, let’s see what’s in store for this high-profile stock. 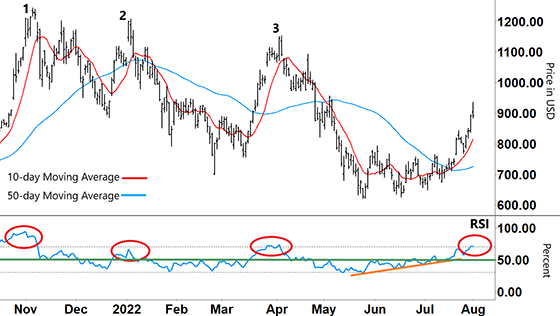 Each of these highs (1 to 3) coincided with the Relative Strength Index (RSI) making an inverse ‘V’ from overbought territory (on or near upper grey dashed line) – represented by the red circles.

Up until then, the long-term 50-day moving average (MA – blue line) showed TSLA was trending higher.

However, with the 10-day MA (red line) crossing down over the 50-day MA on January 19, TSLA’s long-term trend reversed and the downtrend got underway.

After making a lower high at ‘3,’ the RSI reversed from overbought territory and fell right down through support (green line) and into the lower half of its range before hitting oversold territory in mid-May (lower grey dashed line).

Since then, the orange line on the bottom half of the chart shows that buying momentum has increased. This was what enabled TSLA’s stock price to make a series of higher lows.

With the RSI then breaking strongly into the upper half of its range (green line) and staying there, this increased momentum has seen the 10-day MA finally break back above the 50-day MA.

So, after these positive signals, what am I expecting from here?

The 10-day MA is accelerating above the 50-day MA at a steep angle. For TSLA’s uptrend to take hold, we’ll need to see this pattern continue.

The other thing I’m watching is the RSI…

While this rising buying momentum has driven TSLA higher, the RSI is about to test a key level. It’s now tracking right on the upper grey dashed line (overbought).

When the RSI reversed from at or near overbought territory in 1 through 3, it provided a strong setup for a potential short trade.

And that’s what I’ll be looking for from here…

The key thing to remember is that we need to be patient and wait for the RSI to form an inverse ‘V’ (not just trade in overbought territory) before looking to enter the trade.

Do you think Tesla will rally soon? Or do you think it’s still going to experience a lot of volatility?