Strong equity markets have given investors plenty of reasons to cheer over this past year.

Even after the strong pullback in September through October, major indexes and sectors are making all-time highs.

While the broader market has strengthened, it’s been the opposite for gold miners…

For most of this time, gold mining stocks have been unfavorable. The struggling price of gold has weighed down the sector.

One way I trade gold is through the VanEck Gold Miners ETF (GDX). As you can see in the chart below, GDX was already in a downtrend when we entered 2021…

Then, off the back of a strengthening gold price, GDX rallied from March to May (against the major trend). 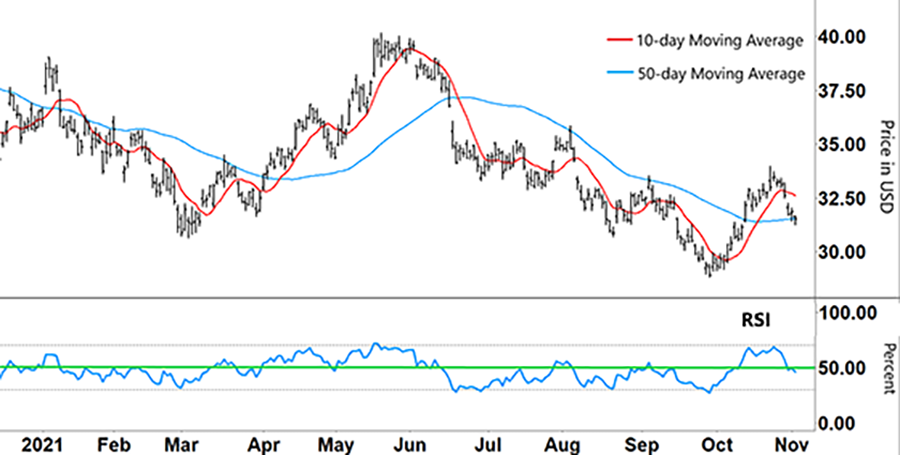 However, as that rally fizzled out – along with an overbought signal from the Relative Strength Index (RSI) – GDX resumed its long-term downtrend. (Remember that the simplest way to determine the long-term trend is by watching the blue 50-day moving average line.)

But, while the long-term trend has been down, there have been plenty of opportunities to go long.

In March, an oversold RSI signal was the pre-cursor to a 13% rally. And in July, August, and September, there were similar opportunities to generate quick, profitable trades.

An oversold RSI signal was the trigger for a bounce in GDX in these trades too. However, the most recent price action has caught my eye…

On October 18, the short-term 10-day MA (red line) crossed back above the 50-day MA (blue line). This was the first time this had happened since the counter-rally back in April.

However, this most recent counter-rally, like previous ones, fizzled out. After the RSI formed an inverse ‘V’, GDX rolled over and started heading down.

And a break below that level will see more selling for GDX ahead.

However, one thing I’m watching just as closely is the RSI. You’ll notice on the RSI (on the lower half of the chart) that I have drawn a green line at the 50% level.

This line represents a support/resistance line for the RSI, which I wrote about on Monday.

Over these past few days, the RSI has been right on top of this green line. That tells me that we have multiple trading scenarios unfolding right now…

However, even if GDX were to keep falling through support below the green line, that could still give us another opportunity for a long trade.

The next RSI level is the oversold signal (30%), represented by the lower grey horizontal line. A bounce off that (with the RSI forming a ‘V’) could also provide an opportunity to go long.

Some traders look at slowly declining stocks like GDX and decide to pass up trading them. They just can’t see any obvious way to make money out of them…

However, as we have seen with GDX, they could be missing out on lots of potential trades. And by using familiar indicators like the RSI and moving averages, you can generate plenty of potential profits.