Today’s runaway inflation has taken a big chunk out of people’s pay – especially when it comes to food prices.

Consumer Price Index (CPI) data shows food inflation is running at 10.1% annually and currently rising at around 1.2% a month.

For consumers trying to make ends meet, the weekly grocery trip has become a huge challenge.

One of the major contributors to rising food costs is the rising price of agricultural commodities.

When we last checked the Invesco DB Agriculture Fund (DBA) in May (red arrow in the chart), it had been rallying for almost two years – and that rally accelerated further with the war in Ukraine.

However, recently commodities like wheat and corn have rolled over, causing DBA to retrace from its yearly highs.

DBA is now trading back below the level it was on the day of the Ukrainian invasion.

Given the huge impact it has on the price of food and inflation, today I’ll discuss what’s coming next for DBA.

Let’s pull up the chart… 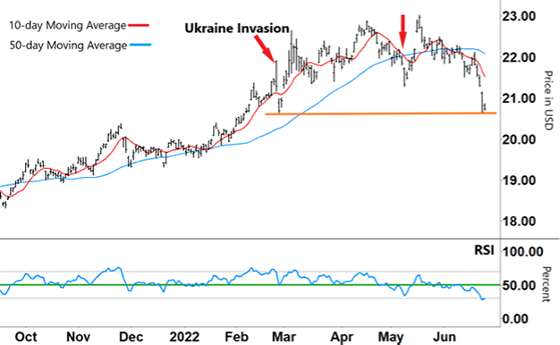 On the chart, the long-term 50-day moving average (MA – blue line) shows DBA trended higher up until this past week.

While it’s not captured on the chart, that uptrend began back in mid-2020. You can also see how DBA’s uptrend accelerated in the first quarter of 2022.

In mid-January, the 10-day MA (red line) began to accelerate above the 50-day MA. This caused the 50-day MA to also climb more steeply.

Throughout the rally, the Relative Strength Index (RSI) added to the bullish sentiment. For the most part, it has remained above the green line in the upper half of its range.

But after peaking on April 18, DBA reversed lower. This coincided with the RSI forming an inverse ‘V’ and lowering from the upper grey dashed line near overbought territory.

When I wrote about DBA on May 10, its down move looked to be gathering momentum.

First, the RSI had just broken below support and into the lower half of its range (a negative signal). Second, the 10-day MA looked to be on the verge of crossing down over the 50-day MA.

While DBA did initially fall, the RSI formed a ‘V’ (red circle) and jumped back above the green line. This caused DBA to make a higher high on May 17.

However, now that the RSI is reversing again – and the 10-day MA is crossing down below the 50-day MA – DBA is trading back at its February lows (orange line).

Well, the action around the RSI is key…

When the RSI formed the ‘V’ in May, and then rallied back above resistance (green line), DBA bounced.

If it forms a ‘V’ like the previous pattern in May, then we could also see DBA bounce off its current level… and that could provide the opportunity for a long trade.

However, the RSI needs to make a definitive move higher from that ‘V’ before we enter any trade.

If the RSI instead meanders in the lower half without any clear ‘V,’ then buying momentum will remain subdued… and DBA will fall further.

How have you been managing your grocery costs with today’s inflation?