So far, 2022 has produced the type of global events that should see gold flourish…

A 40-year high in inflation, soaring commodities, plus the war in Ukraine.

Its history as a hedge against inflation and geopolitical instability led the VanEck Gold Miners ETF (GDX) to rally over 40% from January to its peak on April 18.

However, GDX shares reversed sharply after hitting that high. Within weeks, GDX was trading 30% lower.

When we last checked GDX on June 7 (red arrow on the chart), it had temporarily found short-term support and was trying to rally higher.

But that rally soon fizzled out.

Now, GDX is trading back around its January lows and retesting long-term support.

So, today I’m going to discuss what I see happening next. 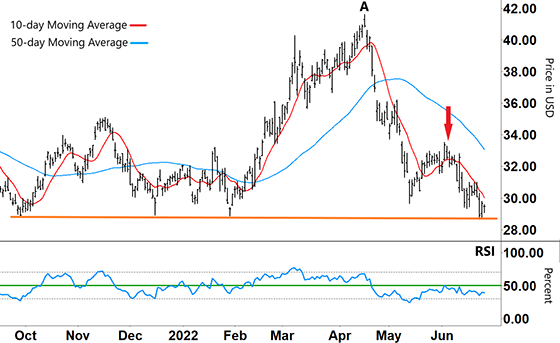 The reversal from GDX’s high at ‘A’ was caused by divergence between the stock price and the Relative Strength Index (RSI).

As GDX made higher highs, the RSI made lower highs (signaling a drop in buyers). This pattern often precedes a change in direction.

This downward trend was then confirmed when the 10-day moving average (MA – red line) crossed down over the 50-day MA (blue line).

But that move ran out of momentum in mid-May.

When the RSI formed a ‘V’ out of oversold territory (lower grey dashed line), GDX rallied and the RSI moved back toward resistance (green line).

Earlier this month, we were looking for two things to confirm GDX’s rally would ensue…

If these two scenarios failed to play out, I wrote GDX would likely retest its long-term support… and that’s exactly what happened.

Despite testing it twice, the RSI failed to break through resistance.

And now that the RSI is tracking sideways in the lower half of its range, GDX has little buying momentum to prop up its stock price.

For GDX to rally, it first needs to hold its long-term support at the orange line.

If it can do that – and the RSI moves higher toward resistance – then GDX could be in for a short-term bounce.

Then, a break above resistance could provide GDX with the momentum to reach its June 2 high at $33.52.

Any long-term rally beyond that would depend on the RSI remaining in the upper half of its range.

However, if the RSI rallies up to resistance and fails to break through, then any bounce will be short lived.

Meaning, with the RSI stuck in the lower half of its range, a break below long-term support – and a new leg down – would likely be in the cards.

What are your predictions for GDX? Will it gain enough momentum to rally again?