I’m sure no one needs any reminders, but one thing the global pandemic has reinforced is the importance we place on healthcare…

Whether it’s frontline responders or medical researchers working on new drugs, the industry has been working around the clock for almost two years.

Whatever new strains and paths the virus takes from here, one thing won’t change…

The demand for healthcare services looks like it’s only going to keep growing.

When we last checked in on the Health Care Select Sector SPDR Fund (XLV) in October 2021 (red arrow on the chart below), XLV was coming off an 18-month rally… 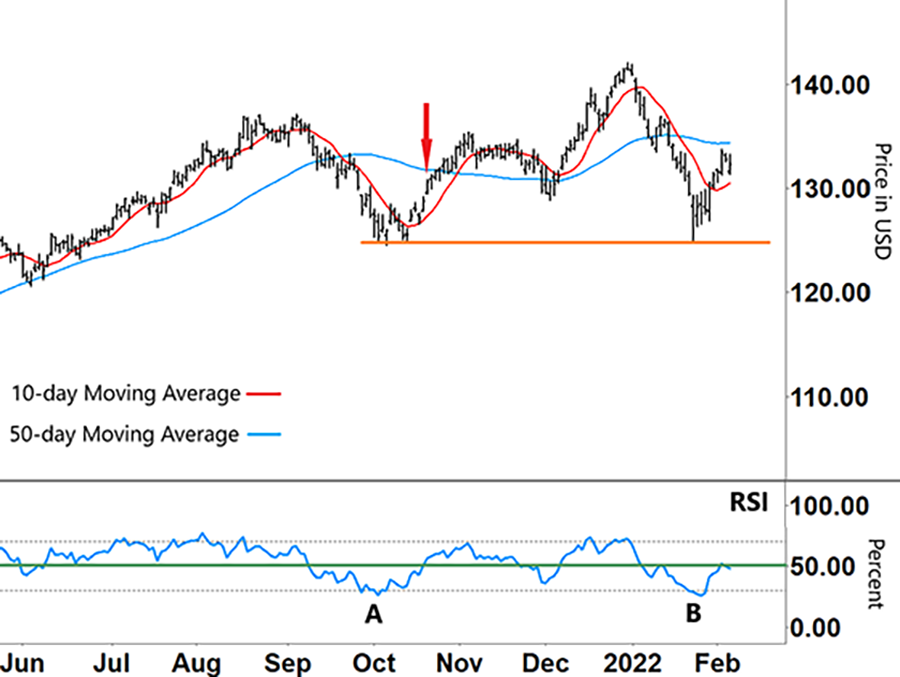 For XLV to rally from there, the first test was to hold support. So, we looked for the RSI to rebound out of oversold territory.

The 10-day moving average (MA – red line) crossing back above the 50-day MA (blue line) would confirm the re-emergence of the uptrend.

And that’s exactly what we saw… XLV rallied off support and hit its all-time high of $142 on December 30.

However, with the RSI showing XLV to be overbought (above the upper grey horizontal line) – and the broader market selling off heavily – XLV began to fall as we came into the new year.

Apart from a tiny counter-rally in mid-January, XLV fell 12% in just a few weeks.

That action saw the RSI go into oversold territory again (B). It also coincided with XLV retesting the support level it held in October 2021 (orange line).

With the RSI forming a ‘V’ and rebounding higher, XLV has bounced these past couple of weeks…

The RSI is right in the middle of its range on the green line (support/resistance level), and it’s right at the crossroads.

Fortunately, this could provide us with a trade whichever way it breaks from here.

So, what am I expecting next?

If the RSI breaks above the green line and rallies up to or near the upper grey line, that could offer a long trade. This move could see XLV rally from around $132 and retest its December 30 high.

Remember that our emphasis is always about being nimble. If we’re holding a profitable position and momentum starts to dwindle, we would bank that in a heartbeat and prepare ourselves for the next trade.

If the RSI instead rebounds off resistance and starts to head lower, that could provide an opportunity to go short. A move like this would likely see XLV soon retesting support.

Remember, our emphasis isn’t on big wins but rather on taking money out of the market when we can.

Until XLV breaks below support (orange line) or above its December 30 high, it’s going to remain in its current range. And that could offer up plenty of opportunities to pick up small but profitable trades.

What are your predictions for the healthcare sector?