Hospitals and healthcare providers have been working around the clock to keep our nation safe from COVID for the past 18 months.

But, as we know, healthcare has always been important… not just during a pandemic.

That’s why healthcare typically ranks in the biggest three or four sectors (out of 11) by market cap.

However, some investors might forget that this sector has little correlation to the economic cycle… That means it can generate strong profits even if the rest of the market is tanking.

That simply reflects the value folks put on their health… irrespective of the economy’s strength.

After rallying strongly into this August – a rally that began in March 2020 – XLV spent most of this September retracing.

Since the start of this month, XLV has been fighting to find a bottom… and a new direction. 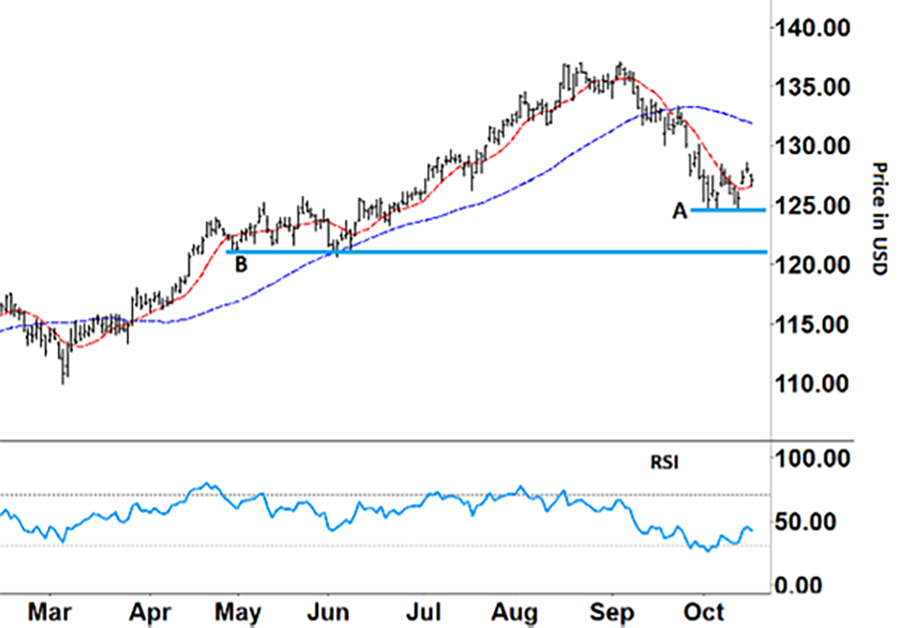 Then, when the 10-day MA crossed down over the 50-day MA, that told us that the uptrend was over for now.

After rolling over in August, XLV fell steadily through September and into the start of this month.

Since then, it has been forming a base as it bounced along the upper light blue horizontal line (A) just below $125.

This forming of a base coincided with an oversold signal from the Relative Strength Index (RSI) at the bottom of the chart… before XLV turned back higher with an increase in buying momentum.

Right now, XLV’s share price is tentatively moving higher, along with this uptick in the RSI. Clearly, what happens at this price level (A) will determine the next direction for XLV…

And, there’s a good chance that XLV may test this immediate support level again over the next week.

So, what happens from there? Let’s take another look at this chart…

If XLV can hold this support (A), then the focus returns to our two MAs. The 10-day MA will need to cross back above the 50-day MA to confirm a new uptrend is emerging.

And this could provide an opportunity to go long…

But, if it fails to hold this level (A), that’ll bring the next lower level into play – the lower light blue horizontal line (B).

That lower level (B) is right around $121, and dates back to a base XLV formed from April to June. After consolidating at this level, XLV went on to make its all-time high on September 3 ($137.04).

A move below this lower level could bring in a wave of new selling, with the next level below that around its March low of $110.

A move like that would give us plenty of time to prepare for a short trade.

For now, though, we’ll concentrate on the price action around the current level (A) and see if it holds. We’ll also keep monitoring the RSI to help us gauge momentum.

We know that after forming that base in April through June, XLV went on to rally for three months.

If that pattern repeats, there could be some really nice profits on the horizon…