To say that 2022 has been a crazy year would be an understatement.

With the war in Ukraine, inflation running at 40-year highs, and interest rates rapidly increasing… investors hardly know which way to look.

In addition, many of the mega-cap tech stocks that drove the two-year bull market, have now run into a brick wall.

When the markets are this volatile, knowing when to jump in and out can be challenging… and costly if you get it wrong.

That’s why I keep an eye on the CBOE S&P 500 Volatility Index (VIX). The VIX helps me identify potential changes in market direction. 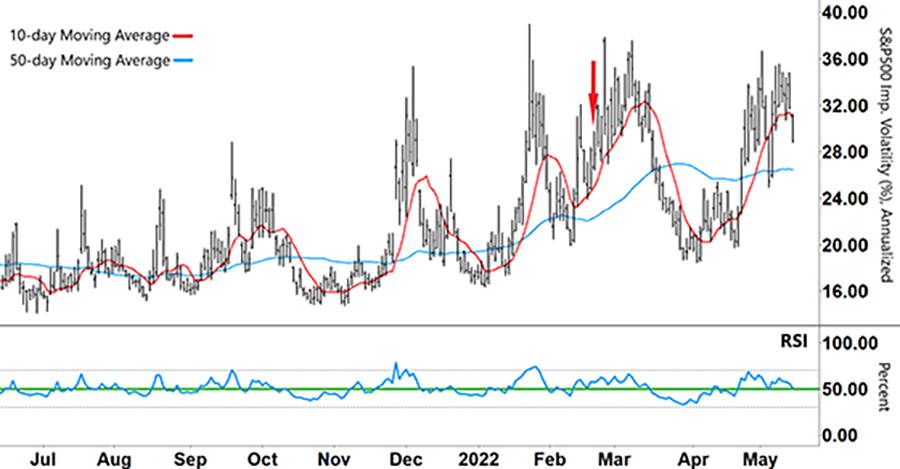 Typically, the VIX spikes when the S&P 500 falls. That’s why the market fell heavily through January while the VIX rallied strongly.

When we last looked at the VIX back in late February (red arrow), we saw a clear uptrend in the 50-day moving average (MA – blue line). This showed that volatility generally was increasing.

And back then we saw that after a brief pullback, the VIX was again rising strongly. This was adding to the stock market rout…

Only after the VIX peaked in March and rolled over did the relief rally begin. That is, the VIX steadily fell as the S&P 500 rose.

After bottoming out through late March and into April, the VIX spiked higher again. This coincided with the massive selloff we’ve seen over the past few weeks.

So, where is the VIX and market heading from here?

Well, given the big intra-day moves in the VIX, sometimes the chart can look congested. So, to gauge short-term moves, I watch the 10-day MA (red line).

As you can see, the 10-day MA has just rolled over. It’s still in its early days of this current down move, but I’ll be looking over the coming week to see if the 10-day MA crosses down over the 50-day MA.

If that move were to happen, that will show that volatility is dying down and the S&P 500 could be forming a base from which it can rally.

Take another look at the bottom portion of the chart…

The RSI is tracking right along support (green line). If the RSI breaks down through support and into the lower half of its range, then that would indicate lower volatility.

And that means higher probability of another relief rally.

However, right now it all hangs in the balance…

Back in February, even when the RSI briefly fell through support, it soon broke back above the green line. Volatility then continued to increase, while the RSI stayed in the upper half of its range.

Only when the RSI finally broke through support and kept falling through mid-March did the S&P 500 form a base off which it rallied.

When volatility is as high as it is now, it throws up plenty of trading opportunities.

However, if you time your trade wrong, you can quickly tear up your money.

So, continue watching the VIX closely to identify any changes in direction. It will help put the trading odds in your favor.

How have you been managing the recent volatility in the markets?