A few weeks ago, we checked in on the VanEck Gold Miners ETF (GDX).

We saw that while the broader market had fallen heavily throughout the start of 2022, GDX had instead rallied strongly.

From early February to its April high, GDX rallied 44%.

When I wrote about GDX on April 26 (red arrow on the chart), it had just fallen 10% in the previous week and was looking vulnerable to further falls.

Since then GDX has continued to fall. Right now, it’s trading back at a key level.

After such a strong rally and a dramatic fall, today I’m going to discuss what’s next for GDX.

So, let’s pull up the chart… 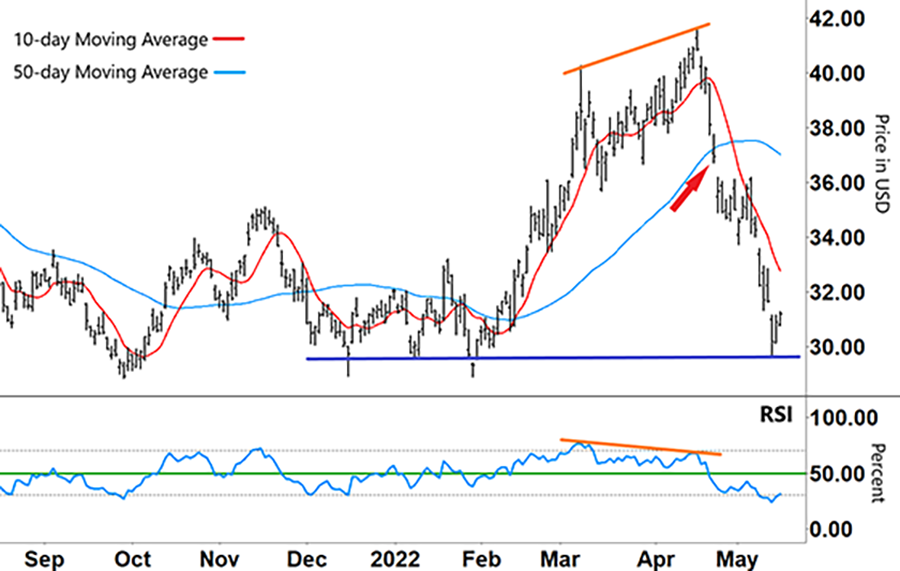 The dark blue horizontal line represents support for GDX. It held through December to February and was the base from which GDX rallied.

The stength of that February rally is shown by our two moving averages (MAs).

However, divergence (orange lines) between the stock price and the Relative Strength Index (RSI) led to a change in direction.

GDX then tried to find support as it briefly traded sideways through April.

However, with the RSI stuck in the lower half of its range, there weren’t enough buyers to maintain that price level.

The 10-day MA crossing down over the 50-day MA then confirmed GDX’s downtrend.

Right now, GDX is trading right back at the same level (dark blue line) from where the original rally began.

After such a strong fall, the RSI is showing us that GDX is in oversold territory – below the lower dashed grey line in the bottom half of the chart.

If the RSI rallies back toward resistance and GDX holds support, then that means GDX could be in for a brief bounce.

And this could provide an opportunity for a potential long trade.

However, what happens around that resistance level is key.

If the RSI breaks back above through resistance and into the upper half of its range, then GDX has the potential for a bigger rally.

We would then look for the 10-day MA to break back above the 50-day MA for confirmation of an emerging uptrend.

However, if the RSI fails to break through resistance, then any bounce could be short-lived.

Without sufficient buying momentum a stock can’t maintain an uptrend.

And if the RSI remains in the lower half of its range, then it’ll be difficult for GDX to hold its current support.

A breakout in either direction could be the start of a much bigger move.

Where do you see GDX headed next? Will gold continue to fall?