The real estate sector is particularly sensitive to interest rates.

So, with two rate rises already this year – and several more to come – the iShares U.S. Real Estate ETF (IYR) has been volatile.

After hitting its all-time high in late 2021, IYR got caught up in widespread selling at the start of 2022.

In the first couple of months, IYR dropped by around 17%. But, after forming a low in late February, IYR began to grind higher.

When we last checked IYR on March 30 (red arrow on the chart), that uptrend was starting to gain traction.

Initially, that rally looked promising. But eventually, that move faded out and IYR fell heavily again.

Today, I’m going to discuss what to look out for next. 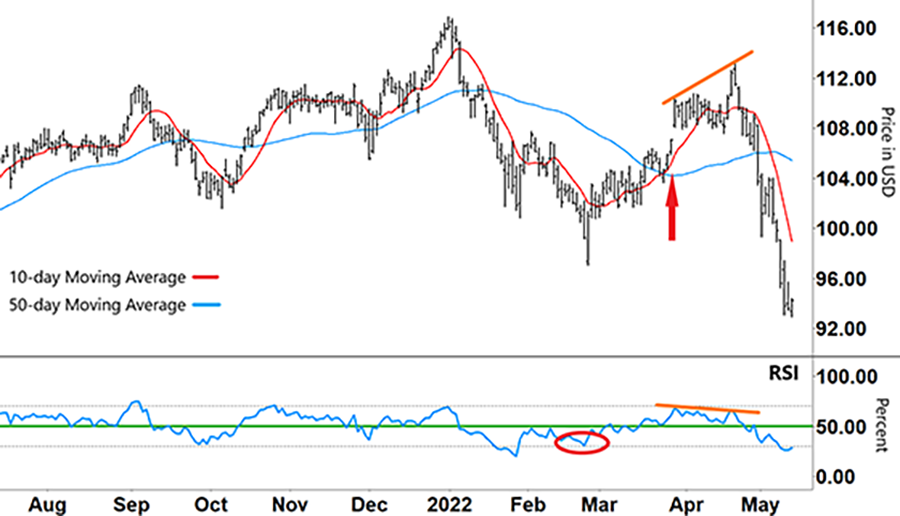 There are two technical indicators that can explain the February rally…

This was a higher low than the one that formed in late January.

Second, the action from our two moving averages (MAs) added to the bullish sentiment. The 10-day MA (red line) had recently broken above the 50-day MA (blue line).

However, this was where buying momentum started to dry up and IYR started to fall.

There were also two tell-tale signs that preceded the fall…

First, is the divergence (orange lines) between IYR’s share price and the RSI. In this case, IYR made a higher high at the same time the RSI made a lower high.

Second, after forming an inverse ‘V’ the RSI traded straight down through support (green line)… a bearish signal.

The emerging downtrend was then confirmed by the 10-day MA crossing back down over the 50-day MA.

So, what are we looking at from here?

Although IYR is in a downtrend, it doesn’t mean we have to trade it in only one direction. After such a severe fall from its April 21 high, a bounce is still likely.

This is where the RSI comes into the picture.

Right now, the RSI is again in oversold territory. If it forms a ‘V’ and begins to track higher, that could provide an opportunity for a long trade.

However, like any countertrend trade, we must be ready to take any profits off the table. The previous price action shows us how quickly IYR’s direction can change.

The last thing we want is to let a potential winning trade turn into a loser.

But if the RSI flattens out and remains in the lower half of its band, that means IYR will fall further.

When you see such big swings like the ones IYR is showing this year, you know there’s going to be plenty of trading opportunities.

The key is to trade purely off what the chart shows and to always be ready to take profits as soon as they appear.

How do you think the real estate sector will perform this year?