A couple of weeks ago, we looked at a part of the market that seemed to have fallen off the radar of many investors… the industrial sector.

As I noted at the time, perhaps that was to be expected given investors’ passion for tech stocks.

However, given the huge number of people it employs – not to mention the broad diversity of companies – the industrial sector warrants close attention…

Quite simply, the industrial sector reflects the health of the economy.

This sector includes stocks like John Deere, 3M, Honeywell, and Lockheed Martin. When the economy is thriving, then so are these companies.

One way I keep tabs on this sector is through the Industrial Select Sector SPDR ETF (XLI).

When we looked at XLI two weeks ago, we saw that it had rallied strongly from March 2020 to May 2021. From there, it had traded sideways.

Today, I’m going revisit this sector and update you on what I see happening next… Because I think things are about to become interesting. 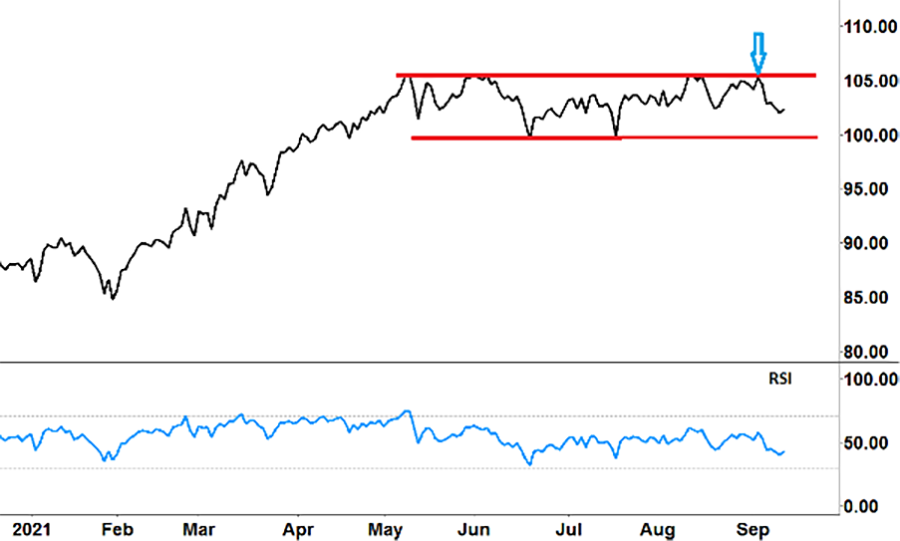 As the chart shows, XLI has been trading in a tight range since reaching its high in May. That’s defined by the two red lines on the chart.

When I wrote about XLI on September 1, I noted that it was approaching an important level – the upper resistance line of the trading channel.

XLI hit that resistance (blue arrow) the following day, and rebounded lower – right back to the middle of the trading channel.

So, what am I looking for now?

First, I’m waiting to see if XLI tests the lower level (support line) of the trading range. That’s where the relative strength index (RSI) fits into the picture.

When XLI bounced off support mid-June and again mid-July – it coincided both times with the RSI forming a V-shaped trough.

The bottom of those RSI “V’s” match exactly with XLI bouncing off support.

I’ll be watching to see if this pattern repeats, should XLI trade down to that support level. If it holds support, and the RSI forms another “V”, that could be a trigger to go long XLI.

Given XLI is in a sideways pattern, that would be a mean reversion trade. Even in a relatively tight range – like XLI is in – that could provide a quick and tidy profit.

Beyond that, I’m also watching XLI as part of a bigger picture…

If you recall, when I wrote about XLI on September 1, I referred to its performance in relation to both the Nasdaq and the S&P 500 (SPX).

While XLI had traded sideways since May, the Nasdaq had rallied 17%. Meaning that tech stocks were the driving force in SPX’s rally over that same time.

That left the S&P 500 vulnerable to any correction in the Nasdaq.

However, what happens next with XLI is going to be crucial… That’s because it has wider implications for the market.

If XLI was to break down below its current support level – along with a fall in the Nasdaq – SPX could be even more vulnerable to a fall.

However, the current chart pattern is telling me there could be plenty of big trading opportunities ahead…