One of the key themes in the market has been the rotation out of Big Tech and into large, “old-economy” value stocks.

This change in money flow helped propel the Dow Jones Index in October to its best monthly performance in 47 years. And its rally has continued this month…

Recently, the Dow Jones was trading at around 20% higher than its October low. However, not only have Dow’s stocks enjoyed the big rally…

Companies that supply materials like packaging, metals, chemicals, and gases to the industrial sector have also had a big run.

The Materials Select Sector Fund (XLB) is now up around 22% in the past month. But after such a rapid rise, XLB is showing signs that it could be running too hot.

So today, let’s check out what’s coming next…

On the chart below, the 50-day moving average (MA – blue line) shows XLB has been trending down for most of 2022. A series of lower highs also marked this slide.

But within that overall downtrend, we’ve seen lots of countertrend moves in the shorter-term 10-day MA (red line).

Take a look at the XLB chart… 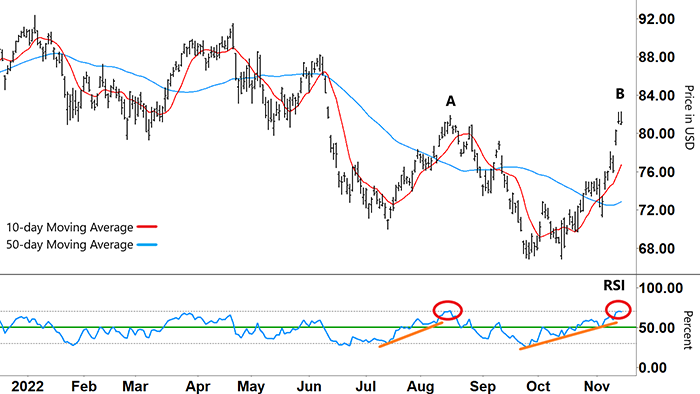 Since the start of 2022, the 10-day MA has crossed the 50-day MA eight times. The steepness of those crossovers illustrates just how sharp these countermoves have been.

However, I want to concentrate on XLB’s two most recent major moves (A and B) today…

After falling steeply and gapping down through July, XLB found a short-term base in July. This action coincided with the Relative Strength Index (RSI) finding support in oversold territory (lower grey dashed line).

Then, as the RSI made a series of higher lows (left orange line), XLB’s rally gained momentum. This rally then peaked when the RSI went into overbought territory (left red circle) in August at ‘A.’

The RSI then reversed and tracked all the way back down to oversold territory, and XLB fell to its yearly lows.

Soon after, a similar pattern to the July rally began to take hold.

Once again, the RSI bounced out of oversold territory, enabling XLB to find a short-term base.

The strength of that rally has enabled XLB to gap higher several times this past week.

However, it has also put the RSI into overbought territory (right red circle), with XLB potentially topping out at ‘B.’

Watching for a Strong Trade Setup

If the RSI continues to track along overbought territory without a definitive move down, then XLB could continue riding this wave.

Then we would have to see if the 10-day MA continues to accelerate above the 50-day MA. That would provide further evidence of a prolonged up-move.

I’m also looking to see if the pattern from August repeats (red circle).

Back then, XLB reversed from its peak when the RSI formed an inverse ‘V.’ A similar move now with the RSI could see another fall in XLB’s future.

And that could provide the setup for a potential short trade.

In the meantime, we’ll keep our eyes glued to the RSI… and wait patiently for a strong setup to unfold.

In today’s mailbag, subscribers to One Ticker Trader thank Larry for success with their most recent trades…

It was well over a 100% gain, and I could have sold it earlier this week for over 100% gain as well. I’m looking so forward to learning from you and exploring a whole new world.

By the way, I used TD Ameritrade, and those guys walked me through opening the trade and then closing it today. They are marvelous for newbies like me.

I’m so happy you recommended them for options trading. Again, thank you for giving me a new life in a new world!

The option trade you just outlined was my very first and I was pretty scared, but it worked just how you said. I was extremely happy. Keep them coming.

P.S. I only traded one contract as per your advice.

I just started with your service a few weeks ago. So far, I’ve made four trades and lost only on my first trade because I didn’t see the alert to close the trade until the market was closed.

I’m really glad I’ve found your website. It’s giving me hope of gaining back what I’ve lost this past year. Thank you so much.