One of our service providers is currently experiencing issues which affect member site access and order processing. We apologize for any inconvenience.

One of our major themes this year has been the importance of growth stocks to the market’s rally.

After breaking out of the COVID lows last year, it was both growth and industrial stocks that helped drive the market higher.

But all that changed this past May…

Since then, with industrial stocks continuing to trade sideways, it was the big tech stocks from the Nasdaq that drove the S&P 500 higher.

But things may now be changing for industrial stocks…

So, let’s take a look at the Industrial Select Sector SPDR ETF (XLI). In the chart below, you can see the strong rally in XLI up until May. The gap between the two moving averages (MAs) shows just how strong that rally was. 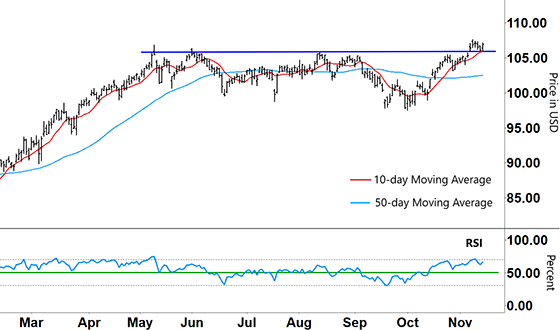 This showed that XLI was transitioning from an uptrend to a rangebound market… It also created the initial points of what would become a resistance level (dark blue line).

As the rally fizzled, so did momentum in the Relative Strength Index (RSI). The RSI broke down below its support (green line) around mid-June.

Further evidence confirming this transition was the action of our two moving averages. As you can see from mid-June to early September, the MAs tracked each other closely until the 10-day MA broke lower throughout September.

Only when the RSI formed a ‘‘V’’ in September, and again in early October, did the XLI stock price find a floor from which it rallied. As the RSI rallied from an oversold signal (30%) to overbought (70%), XLI traded right up to, and through, that resistance level.

That’s a significant price action after being range-bound for nearly six months.

So, now it’s the RSI that provides the clues as to what happens next…

Right now, XLI is in the process of establishing whether that resistance level will change into support.

Although it’s still early, one bullish signal is the 10-day MA diverging further away (higher) than the 50-day MA.

If this breakout holds, and XLI transitions into an uptrend, it will have major implications…

First, it could provide an opportunity to generate a long trade in the industrials sector.

More importantly, it would mean that any further rally in the S&P 500 would be less reliant – and therefore less vulnerable – to a pullback in the big growth stocks from the Nasdaq.

So, what do we need to lookout for here?

When XLI was rallying up through May, the RSI was constantly running into the upper grey line. Sometimes this would lead to a brief selloff. But overall, XLI kept rallying.

You can also see during this rally that the RSI never broke its support level (the green line). The momentum remained in the upper half of the RSI chart when XLI was rallying.

So far, despite the RSI touching (or coming close) to the upper grey line in October (and again this month), XLI has kept rallying.

The real test will be what the RSI does when it tests its support line in the future.

If the RSI holds that support – along with XLI also holding above the dark blue line – then that means a new uptrend in XLI and the broader market could be underway.

P.S. Have you been investing in growth stocks this year? What do you think will rally next?