With gas prices up 50% over the past year, it’s fair to say that many folks are experiencing inflation each time they fill up their tank.

Of course, it’s not just drivers that are feeling the impact. High oil prices have run right through the economy, adding to inflationary pressures – something that can be bad news for everybody.

When the oil price rallied, it wasn’t just the big oil companies that enjoyed the boom. Those that supply services to the oil sector also came along for the ride.

However, recently things have changed…

As the oil price retreated from its recent highs, so did the oil services sector. When we took a close look at the VanEck Oil Services ETF (OIH) a couple of weeks ago (red arrow in the chart below), it had recently rolled off its October highs and was heading down…

While our focus was on the most recent move down, we were looking at OIH’s chart in the context of a much broader pattern… a head and shoulders pattern, which is often the precursor to a major reversal. 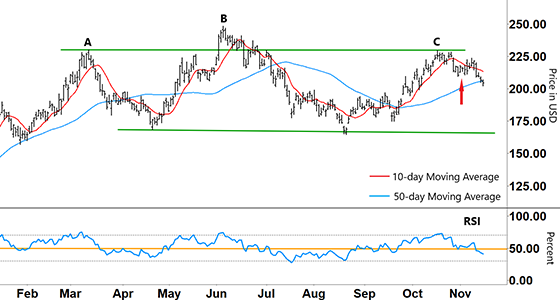 To recap with our OIH chart, the ‘A’ and ‘C’ are the shoulders connected by the upper green horizontal line and ‘B’ is the head. The lower green line is the neckline.

When we previously looked at OIH, it had rebounded lower off resistance at ‘C’ (the shoulder line) and was falling along with lower momentum (declining RSI).

However, as the Relative Strength Index (RSI) ran into the 50% support level (orange line) and initially held, the fall in OIH temporarily flattened out too. After a brief upturn in momentum, OIH tried to rally before it rolled over again and fell lower this past week.

More importantly, this fall in OIH coincided with the RSI also breaking down below its own support level.

Remember that the support/resistance line for the RSI is no different than any other support and resistance line. Once the RSI breaks support, that level can change into a resistance level (and vice versa).

Over this coming week, I’ll be watching to see if the RSI support level changes into resistance.

If the RSI tests this resistance level and rebounds lower (towards the lower grey horizontal line), then we can expect to see OIH keep falling lower from there.

The last time the RSI went into oversold territory and formed a ‘V’, that coincided with the August low at around $165.

The other thing I’m watching is the action of our two moving averages (MAs). Over the last couple of days, OIH’s share price has crossed down over the longer-term 50-day MA (blue line)…

If that share price continues to fall lower from here, we can expect the 50-day MA to slowly roll over and down as well (a bearish signal).

Adding to the downward pressure would be for the short-term 10-day MA (red line) to cross down over the 50-day MA. At its current trajectory, that could happen over the coming week.

From there, the first price target for a short trade is the neckline of the head and shoulders pattern. At $165, that could prove to be a nice quick trade from OIH’s current level.

Of course, for that to happen, there’s still a lot of price action that will need to play out. For now, we’ll need to wait and see.

However, if OIH trades down to that level (neckline), that means the head and shoulders pattern would be complete… Meaning that OIH has finished a major reversal – from an uptrend to new downtrend.

A break below that line could be the setup for an even bigger potential short trade.

Have you been investing in oil this year? What do you think will happen with this sector?