Larry’s Note: It may seem like there’s no safe place left for your money… 2022 has killed stocks, bonds, crypto, commodities – and even cash isn’t a good option due to inflation.

That’s why I’ve been working on a special project… to give my readers a better income solution than the paltry returns of “high yield” savings accounts, dividend stocks, or even Treasury bonds.

A little-known financial instrument can give us 750% more yield than most savings accounts… and 998% more than most dividend stocks.

And the beauty of it is, this instrument also gives us downside protection in case the market volatility continues.

I’m nearly ready to share all about this opportunity… so please keep an eye out for an official invitation. But to make sure you don’t miss out, please mark this date on your calendar: December 7.

You can click right here to add this urgent briefing to your calendar.

With less money to go around, folks simply have less to spend on nonessential items. That’s why the consumer discretionary sector has lost around one-third of its value since the start of 2022.

By comparison, the other side of the consumer equation – consumer staples – has held up relatively well…

The Consumer Staples Select Sector SPDR Fund (XLP) is trading just a couple of dollars below where it was in January.

However, that doesn’t mean this sector lacks trading opportunities. XLP has had numerous swings in 2022.

When we last checked XLP on October 17, it had just traded off its yearly lows. And it was showing promising signs of an emerging rally.

Today, we’ll see how that move played out to reveal what we can expect from here…

Within that sideways pattern, XLP has made six major countertrend moves… 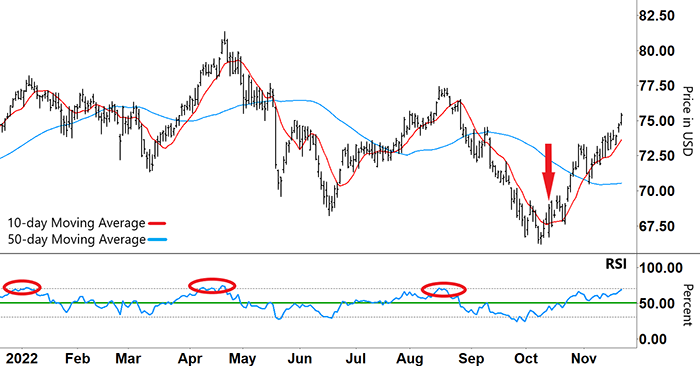 Rather than getting put off by all these moves, we need to look for tradeable patterns.

In October, we saw that when the Relative Strength Index (RSI) formed a ‘V’ and rallied from oversold territory (lower grey dashed line), XLP subsequently bounced.

And the current up move began with this exact setup too…

But today, XLP’s strong rally is pushing the RSI close to overbought territory. So, let’s check out what happens in the upper part of the RSI’s range.

You can see three previous examples (red circles) when the RSI went into overbought territory.

The RSI initially tracked along the overbought line with each. But XLP only reversed when the RSI formed an inverse ‘V’ and began dipping back toward support (green line).

Remember, just because the RSI indicates a stock is overbought, we shouldn’t short it straightaway (if at all). Instead, we need to wait for a decisive move lower before committing to a short trade.

So with the RSI so close to overbought territory, what am I looking for around here?

Confirmation of a Reversal

If the RSI tracks along the upper grey line without any decisive reversal, then XLP’s current rally is likely to go further…

The longer it can stay in the upper half of its band, the stronger the up move should be.

However, if the RSI makes an inverse ‘V’ and retraces lower from overbought territory (like the past red circles), then that could provide the setup for a short trade.

The other thing I’ll be watching is our MAs…

Right now, the 10-day MA is accelerating above the 50-day MA, which typically is a bullish sign. I’ll be looking for this to reverse to confirm any XLP reversal.

For now, we’ll wait and watch closely… Our indicators are telling us a potential trade setup might not be far away.

In today’s mailbag, a subscriber to One Ticker Trader shares their positive experience with Larry’s trade recommendations…

I’m subscribed to One Ticker Trader. Larry’s predictions have had a near 90% hit rate since inception. That’s amazing considering the subscription fee. In fact, it’s the easiest route to build wealth.

I cannot understand the negative reviews. Facts speak for themselves. There is a lot of negative feedback on Larry Benedict’s Opportunistic Trader system.

And to be honest, I don’t understand why. I followed Larry’s recommendations and have made $12K in three weeks. I made my $2K investment on my first day of using his strategy.

I manage my losing trades, and there has been a couple, but there have been many winners. My largest winner so far has been $4.8K in one day. I had a bull put and a bear call at the same time.

The price action ended the day between my two strike prices, and I collected the premiums on both trades. I can’t speak highly enough about Larry Benedict’s strategy.