And with the huge jump in living costs, some folks simply put off their plans to build a new home.

From January to its June low, the iShares U.S. Home Construction ETF (ITB) dropped a whopping 42% – nearly double the S&P 500’s fall over the same time.

But when we last checked ITB on July 25 (red arrow on the chart below), it was showing promising signs of an emerging rally and was about to test a key technical level.

Today, we’ll see how that moved panned out and discuss what we can expect from here. 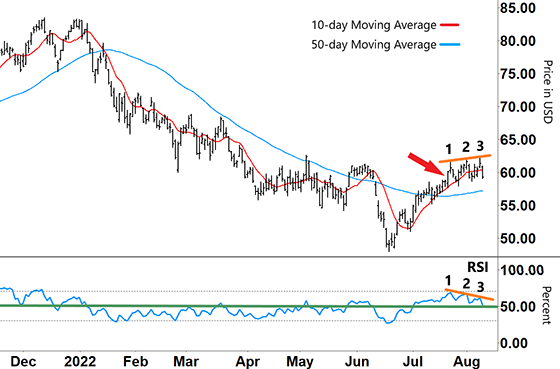 You can see how ITB’s long-term downtrend began at the start of 2022.

Apart from a brief countertrend rally in May and a recent bounce in June, the 10-day MA has remained bearishly below the 50-day MA throughout the year.

Also, the Relative Strength Index (RSI) has predominantly remained in the lower half of its band (below green line). This is yet another tell-tale sign of ITB’s declining momentum.

However, on June 17 the RSI formed a ‘V’ out of oversold territory (lower grey dashed line), which sparked ITB’s current rally to begin.

Plus, there were two key technical indicators that further supported this up move…

Since then, the action around the RSI has caught my eye.

Within the past few weeks, ITB has made higher highs while the RSI made lower highs (marked 1-3).

When these two diverge (orange lines), a change of direction is often in the cards.

Now the RSI is back on support (green line). So, what happens around this level over the coming week will be crucial to ITB’s future direction.

If the RSI holds support and remains in the upper half of its range, then this current rally could still go further.

We would then need the 10-day MA to accelerate higher above the 50-day MA to confirm any rally.

However, a break down below support would dash any hopes of a rally.

If the RSI instead tracks in the lower half of its band, then we can expect ITB to reverse off its recent highs and resume its long-term downtrend.

Either way, this week’s action is proving critical for ITB’s next move.

In today’s mailbag, a One Ticker Trader member thanks Larry for his recent trade recommendation…

Thank you, Larry for my first profitable trade. I subscribed to your letter on August 7. I bought two contracts at $3.50 and then I closed the position the same day at $4.50. I’m excited to follow your recommendation and learn from you. Thank you again!