That’s why Larry’s method goes against everything the “experts” say about building wealth. His One Ticker Trader service can help you make all the money you need for a comfortable retirement – using a single stock.

It’s how he made millions of dollars during the 2008 financial crisis and during the 2020 pandemic. And now this year, it can give you the chance to double your money multiple times every week. Click here to get started.

Around a week ago, we took a close-up look at the Industrial Select Sector SPDR ETF (XLI).

Despite initially holding up in the broad selloff at the start of the year, XLI eventually made a series of lower highs.

In May, XLI tried to rally against this downtrend but momentum dried up and caused XLI to reverse sharply. It soon gapped down to its yearly lows.

When we last checked XLI on August 2 (red arrow in the chart below), it had found short-term support from which it was rallying.

However, that strong buying momentum pushed it up against a key technical level.

Today, I want to see how that move played out and discuss what I’m looking for from here. 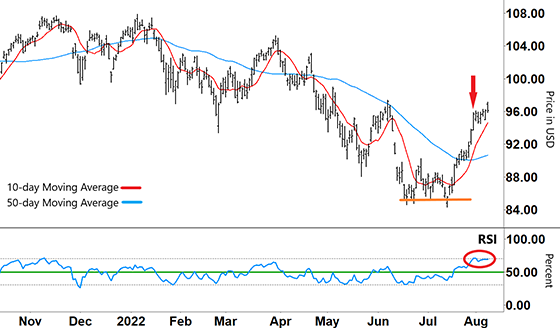 At the time, XLI had just pushed up through the 50-day moving average (MA – blue line) and was showing promising signs of the rally gaining traction.

However, the Relative Strength Index (RSI) reversed strongly back through support (green line) and into the bottom of its range, which dragged XLI’s stock price lower.

From there, the RSI trended higher off oversold territory (lower grey dashed line). And this helped XLI establish the short-term base from which the current rally began.

This rally was supported by two technical signals…

That put XLI within a whisker of taking out its high from June 7 at $97.34. Take another look…

However, this bullish action also pushed the RSI up into overbought territory (upper grey dashed line). So, I’m closely watching the action around here right now.

As the RSI tracked along the overbought line within the past week, XLI’s stock price has started to flatten out.

Although it’s traded slightly higher each day, the lack of momentum has caused XLI to struggle holding above the $96 level. Buying momentum is key to any rally.

So, what am I looking for from here?

Although the RSI is in overbought territory, it doesn’t mean stock price will immediately reverse or that we can enter a short position.

If the RSI continues to track near the overbought line and the 10-day MA moves higher above the 50-day MA, then this rally will go further.

So before considering a short trade, first the RSI needs to form an inverse ‘V’ and start tracking lower.

But if the RSI reverses and tracks back toward the green line, then we can expect XLI’s rally to also reverse and head back around $92. And a break below RSI support could then see XLI trade back below $88.

We’ll see how it all plays out in the coming days.

In today’s mailbag, a subscriber thanks Larry for his new One Ticker Trader service…

Thank you, Larry for the One Ticker Trader service! Your newsletter is great and I know you will do well with this! Thanks!!