It’s hard to think of a better barometer of the economy than home construction.

With the U.S. awash with cheap money and low interest rates, homebuilders have enjoyed a huge boon in demand. However, that jump in demand, along with the pandemic, caused two major issues…

A shortage of skilled workers led to higher wages. Plus, an increase in the demand for raw materials (along with a bottlenecked supply) added to the cost of construction.

Put the two together, and the dream of new home ownership evaporated for many. For most folks, the cost of a new home has simply become too high.

Homebuilders operate right at the intersection of the supply/demand curve. So, with new demand softening, I’m now watching home construction closer than ever.

One of my favorite proxies for the sector is the iShares U.S. Home Construction ETF (ITB)… 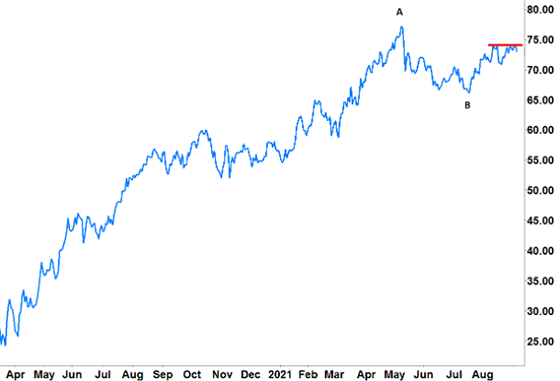 On the chart, we can see that ITB rallied strongly from its March low in 2020 all the way through to the start of September. From there, it traded sideways until the end of last year.

At the start of 2021, however, ITB broke out of its range and moved higher. It rallied to its peak around mid-May (A) – ITB’s all-time high.

After a rally like that, you should expect some pullback. Especially over the space of just 14 months.

But it’s what happening now that I find intriguing…

We’ve spoken a lot about price levels over the past month or so. That’s because I find price levels – the support and resistance levels – so important with my trading.

If a stock tries to break through a price level and fails, that can often lead to a change in direction.

As the chart shows, ITB rallied off the July low and has been trying to break through its resistance at $74 (the red line) now for almost a month.

That would leave us with two different trade scenarios…

First, if ITB can break above the red line, the next target level is $78.61 – ITB’s all-time high (A). If ITB trades above A, the long-term uptrend will be intact, and we can look to go long this stock.

However, if ITB fails to break resistance and instead falls, the next target level is B – ITB’s most recent low.

If ITB falls below B, then a long-term downtrend could come into play. And, we might get the opportunity to place a short trade.

Either way, the home construction sector might just be on the verge of a major change. And that could provide some major trading opportunities.

P.S.Tonight, I’ll be revealing the key to take advantage of a rare phenomenon quickly approaching the markets called “the 7-day blitz.” This event is guaranteed to happen four times a year… and the next one starts as soon as Monday.

Due to its massive volatility, I estimate over $1.2 trillion will exchange hands during the event… which is how I was able to make almost $45 million for my clients during the event when I ran my hedge fund.

The idea of making a fortune from just one ticker might seem crazy. But the truth is, most gains in the stock market come from just a few stocks.

So, if you haven’t already, click here to reserve your spot for tonight’s explosive presentation at 8 p.m. ET… you’ll receive the free ticker just for watching.