Last Thursday, the latest CPI (Consumer Price Index) print came in at 7.9%. That’s the highest in over 40 years.

The pressure is on the Fed to curb stifling inflation across all sectors.

Today, I want to look at one sector that has the greatest impact on everyone… Food prices, which have jumped 7.9%.

Agricultural commodities like wheat, coffee, and meat have seen the biggest jumps. Unfortunately, these make up the basics of many folks’ daily consumption.

Inflation gained traction in the news towards the end of last year. But the chart below of the Invesco DB Agriculture Fund (DBA) tells a different story. 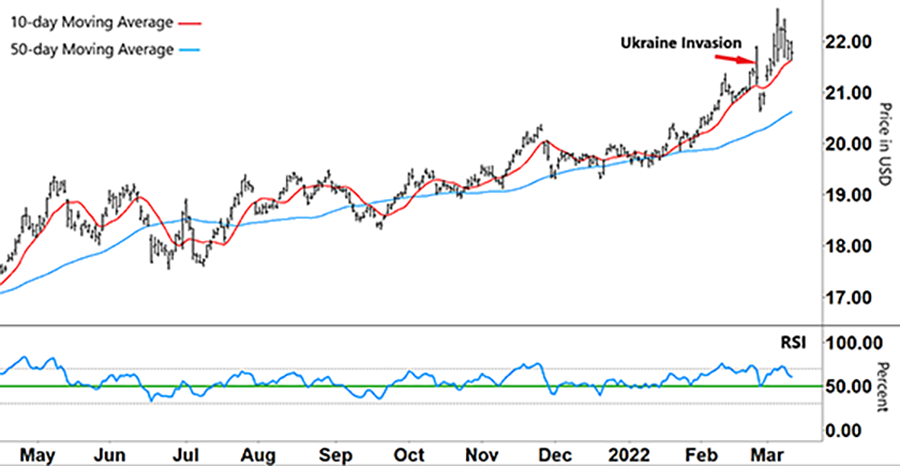 As you can see, agricultural commodities rose steadily last year. In fact, although it’s not fully depicted on the chart, DBA has been in a strong uptrend since June 2020…

You can follow the direction of the long-term uptrend via the 50-day moving average (MA – blue line).

When the 50-day MA rose strongly from May to June 2021, the short-term 10-day MA (red line) accelerated higher above it.

Then, as the 50-day MA’s uptrend became less steep, the 10-day MA retraced and crossed back below. From there until the end of last year, the two MAs crisscrossed several times as they tracked each other closely.

But as you can see, the pattern changed again in 2022.

In mid-January, the 10-day MA began to accelerate above and away from the 50-day MA (bullish signal).

I’m also tracking DBA’s momentum through the Relative Strength Index (RSI) in the lower portion of the chart.

So far this year, the RSI has remained in the upper half of its range and above the green line. Typically, this happens when a stock is in an uptrend.

The two major dips in the RSI on January 27 and February 25 (the day after the Ukraine invasion) saw it test support and hold. In both cases, the RSI formed a ‘V’ before rallying to a fresh high.

These highs coincided with the RSI going into overbought territory above the upper grey line in the lower half of the chart.

Recently, the RSI peaked on March 7 (this time forming an inverse ‘V’), which saw DBA’s share price retrace from its recent high.

The RSI is now mid-range in the upper band and could soon again test support.

After running strongly for so long, we can expect a bit of a pullback. But the big test is to see what happens around the RSI’s support.

If the RSI holds this support and regains momentum, we can expect DBA to rally and re-test its March 4 high of $22.64.

However, even if the RSI falls through support, it won’t necessarily mean the uptrend is over.

A dip into the lower half of the RSI followed by a break back above often precedes the next rally in the market. It’s a pattern that has now held since the DBA rally began in June 2020.

Whatever news emerges from Ukraine (or elsewhere), one thing remains the same…

Only when the RSI breaks down into the lower half of its range and stays there, we can expect this two-year rally to end.

I always look forward to reading positive feedback from my subscribers. Here are some of the latest responses…

Thank you for all of your SPX and The Opportunistic Trader recommendations. Today, I opened the same number of four contracts in five of the six trades. I gained $9,433.66!

Thanks for your “reminder” message today. I had a long learning curve and had more studying to do, but now I’m prepared to proceed with future trades.

I’m a lifetime member and a big fan of yours simply because you walk the walk, and you do it in a modest and methodical manner.