Next week, a variety of economic data will be released. However, there’s only one that matters to the market – gross domestic product (GDP).

That’s because it provides the first snapshot of how the economy performed over Q3.

Over the past month, I’ve written about how the Federal Reserve is grappling with inflation and how that flows into interest rates.

If GDP continues to grow strongly – on top of rising inflation – then interest rate hikes might come sooner than the market is predicting (sometime later next year).

On the other hand, if GDP growth slows, that buys the Fed more time to see if the heat can come out of inflation… Meaning, it could defer any rate rises further out over the horizon…

Either scenario has major implications for interest rates and the markets.

Why cash flow is always key

One of the most common methods used to value a stock is the sum of its future cash flows.

When inflation is only around 1-2% a year, there’s not a big difference between the value of next year’s cash flow and one much further out.

However, when inflation begins to rise, that gap widens. That’s because the further out those cash flows go, the more they’re devalued by a rise in inflation.

For example, with 2% inflation, $100 of cash flow ten years from now would be worth around $82 in today’s dollars.

However, if inflation were to rise to 5%, the value of those same dollars now drops to around $60 in today’s money.

Just a 3% increase in inflation devalues that future cash flow (10 years out) by over 20 cents for every dollar. And that can dramatically decrease the current value of a company’s stock.

But, the real challenge lies within the nature of those cash flows…

If you consider a normal industrial stock like 3M, for example, you might expect its cash flows to grow steadily from one year to the next.

And that means inflation will erode the value of those cash flows at a relatively constant rate.

However, with a growth (or tech) stock, those cash flows are very different. Investors are buying into these stocks on the premise that cash flows will grow exponentially over time.

In other words, they expect cash flows in the future to be multiple times higher than they are right now.

Because the vast bulk of those cash flows are expected many years out, they are more vulnerable to devaluation by inflation.

It all comes back to the nature of the current rally…

I’ve written previously about how tech (and growth) stocks are driving the market higher.

We know this because while the Nasdaq and S&P 500 have continued to rally strongly, the industrial sector has been trading sideways since May. 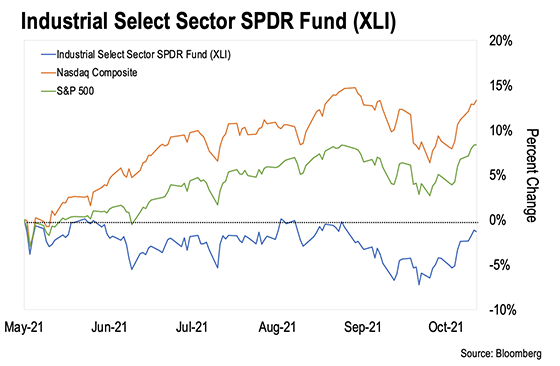 The Industrial Select Sector SPDR Fund (XLI) is currently trading below its May high. Yet over the same time, the Nasdaq has risen about 15% and the S&P 500 by over 8%.

That means the market is vulnerable to any correction in tech (and growth) stocks. Put simply, a fall in the Nasdaq would also lead to a fall in the S&P 500.

And to make matters worse, a rise in inflation could lead to a big drop in value of growth stocks – causing a domino effect on the rest of the market.

Right now, the market seems to be shrugging off the inflation story. But ultimately, higher inflation will lead to the market placing a lower value on stocks.